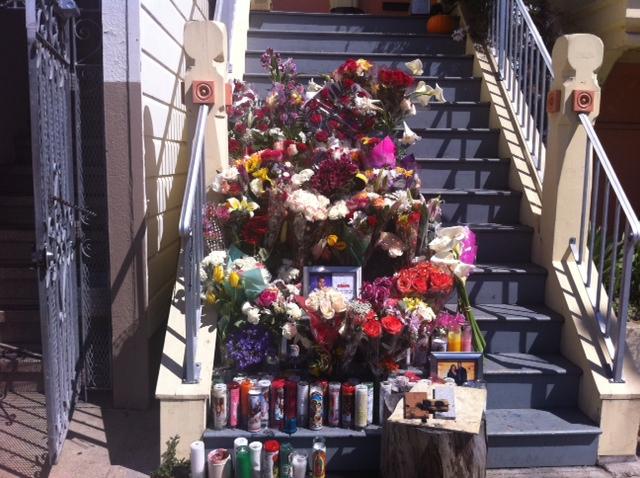 Jacob Valdiviezo surprised his family by coming home to San Francisco from college in Oregon unexpectedly during his spring break last week.

But the visit ended tragically at about 3 a.m. Saturday when Valdiviezo, 19, was shot outside the family’s home in the 2600 block of Bryant Street, near 24th Street, after police say he was mistaken for a gang member.

Family and friends gathered today outside the home, where dozens of candles, bouquets of flowers and pictures of Valdiviezo had been placed on a front porch.

Previously: Family Of College Student Killed In Mission District: “He Wasn’t Affiliated With A Gang”

Carlos Valdiviezo said he was shocked to see his younger brother when he answered the doorbell two Fridays ago, since Jacob didn’t tell his family he was making a surprise visit home from school at Lewis and Clark College in Portland, Ore., where he played on the football team.

“My mom walks in and starts crying when she saw his bags,” he said.

Early Saturday morning, Carlos, 24, was asleep at the home when the shooting happened.

“I wake up to all this screaming and run outside and I see him lying on the floor,” he said.

Jacob had been shot in the head and was taken to a hospital where he was pronounced dead.

Police have not made any arrests in the case and said today that the shooter is believed to be a man around 30 years old who fled in a gray four-door sedan.

“Growing up here, you experience things like this…you just never expect it to be someone close,” Carlos said.

Family members struggled to fight back tears as a steady stream of well-wishers came by the home this afternoon.

“He was a loving person,” said Jacob’s cousin, 26-year-old Leticia Cervano. “He never caused trouble.”
Valdiviezo graduated from Archbishop Riordan High School in 2011 and was a sophomore economics major at Lewis and Clark.

Both schools posted statements on their websites over the weekend mourning the loss.

“He was considered a good friend and leader by his peers and coaches,” Lewis and Clark officials said in their statement. “Our hearts go out to Jacob’s family, friends, teammates and classmates.”

Riordan High School’s statement also offered condolences to the Valdiviezo family and said an anti-violence prayer service is scheduled for 11 a.m. Saturday outside the family’s home at 2617 Bryant St.