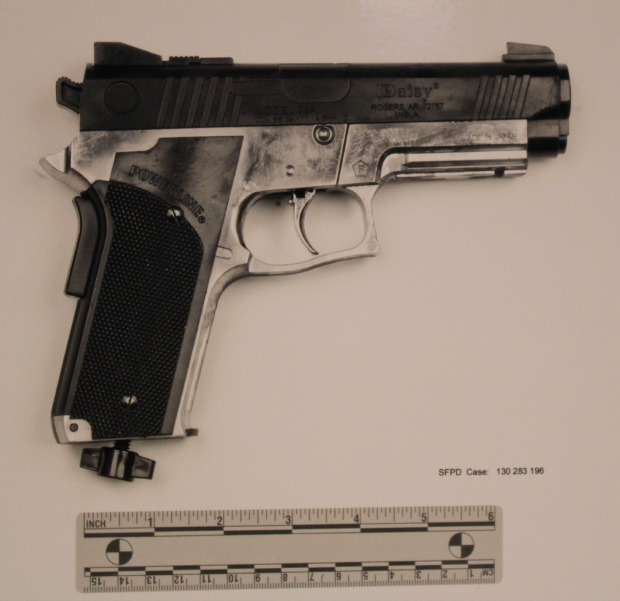 San Francisco police held a town hall meeting today to release more details about a shooting early Sunday in which two men, one armed with a replica firearm, were injured by an officer’s gunfire in the city’s Mission District.

The shooting occurred around 2 a.m. Sunday near Valencia and 17th streets after an altercation between two groups on the street, police Chief Greg Suhr said at a meeting held this evening at Cornerstone Church on 17th Street.

Suhr said some questions still remain about the shooting, including what prompted the altercation and whether the second man struck by the officer’s gunfire was involved in the initial confrontation.

The incident began when a group of men walked out of the Elbo Room bar and headed north on Valencia Street, then were approached from behind by another group of men who confronted them, Suhr said.

Someone in the second group then pulled out what appeared to be a gun (pictured above), prompting a civilian to run to the nearby Mission police station to report the brewing altercation, the chief said.

Two officers went to the scene and saw the man with the gun and one officer fired three rounds, striking the armed suspect twice and the other man once, Suhr said.

The two men were taken to the hospital and were both initially considered to have life-threatening injuries, although the man who was unarmed is now expected to survive, according to Suhr.

The chief said the unarmed man, who is in his mid 20s, told investigators he was an innocent bystander but witnesses have said he was involved in the altercation.

Suhr said the armed man, a 20-year-old San Francisco resident, turned out to be carrying an air-powered gun that does not shoot bullets.

He said other details about the case, including the motive for the confrontation, remain under investigation.

Elbo Room co-owner Matt Shapiro said there were no incidents of aggression inside the bar earlier that night and said he did not have any other information about the shooting.

Tonight’s meeting was sparsely attended by Mission District residents—just a handful showed up and all said they supported the actions of the police in Sunday’s incident.

“I don’t think they had any other choice,” said Kurt Scott, a blind man who said he has lived in the neighborhood since 1972. “I think they handled it as well as possible.”

Supervisor David Campos, who represents the Mission District, also attended the meeting and said he is looking into ways to get more firearms off of the streets, including holding a gun buyback event in the neighborhood at some point in the near future.