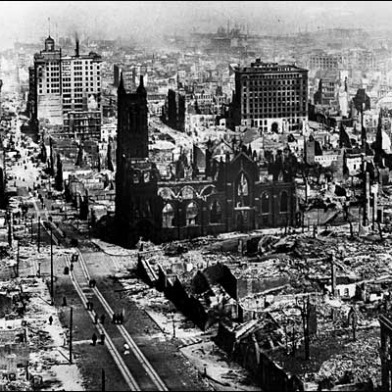 Today marks 107 years since the 1906 earthquake and fire in San Francisco, and authorities are using the occasion to remind residents to prepare for the next big temblor.

The celebrity athletes were scheduled to lead a flash mob dance at about 11:30 a.m. and discuss disaster preparedness.

At the rally, organized by the American Red Cross and PG&E, attendees are being offered free entry to the science museum until 2 p.m. and museum officials are encouraging visitors to check out the earthquake exhibit.

At the exhibit, visitors can experience simulations of the powerful jolts felt during the roughly 7.8-magnitude 1906 quake and during the 1989 Loma Prieta quake, which was recorded at 6.9 on the Richter scale.

The Red Cross is handing out 600 free disaster kits that include basic food items, a whistle and other survival tools, organizers said.

A first – no ’06 survivor at quake ceremony [Chron]

Various agencies, including the Federal Emergency Management Agency, set up booths in front of the museum as part of a resource fair.

Earlier this morning, the city hosted an annual gathering at 5:12 a.m. to mark the moment when the quake occurred.

However, plans for the commemorative event—typically held at Lotta’s Fountain at Market and Kearny streets—were shaken up when a suspicious package was found just before 3 a.m. near Third and Market streets. The gathering was moved to Union Square.

Police have since determined the package was harmless.

All went smoothly at the makeshift location, even without a sound system, he said.

“We had the same program that we would have had at Lotta’s Fountain,” Houskeeper said.

This year, the three known remaining earthquake survivors—Bill Del Monte, 107; Winnie Hook, 107; and Ruth Newman, 111 — were not able to make it to the early morning ceremony because of health concerns, Houskeeper said.

A moment of silence was observed at 5:12 a.m. to remember the thousands who perished in the destruction, followed by sirens blaring and a live band with trumpets playing San Francisco-themed songs during which Mayor Lee chimed in, according to Houskeeper.

Another event was held around 6:30 a.m. at the fire hydrant at 20th and Church streets at Dolores Park, which, lore has it, helped save the Mission District after the quake.

The hydrant this morning was sprayed with traditional gold paint, Houskeeper said.

A breakfast followed, at Lefty O’Doul’s restaurant on Geary Street.

Although the survivors did not make it to the early morning memorial events, Del Monte was able to attend an annual survivor’s dinner Wednesday evening at John’s Grill on Ellis Street.