Hundreds of exhibits at the relocated San Francisco interactive science museum the Exploratorium are almost ready for the curious public to start exploring.

In just eight days, the museum at Pier 15 on the Embarcadero will open its newly built doors on April 17 after the longtime science center at the Palace of Fine Arts in the Marina District closed on Jan. 2.

At a media preview tour today, museum officials showed off the new campus, which will triple its capacity at 330,000 square feet, and features many old favorite exhibits from the shadow box to tornado maker to cow eye dissections.

Although construction crews were still working this morning on finishing touches on the $300 million building project, some 450 exhibits have made the move to the new space, while an additional 150 were created for the various galleries built along the waterfront.

He said the larger facility will increase the museum’s impact, most noticeably with an increase in the student Explainer program to include 360 orange-vested student guides at the museum compared to 120 youth docents at the old space.

Education programs will also get a boost, with more classrooms, resources and teacher sessions for as many as 1,000 educators each year, he said.

Board Chairman George Cogan said the museum will continue to “nurture curiosity” and continue to push the boundaries of science and experiential learning.

A mixture of indoor and outdoor space, the museum is divided into six galleries, including the all-glass Bay Observatory at the end of the pier, which offers a view of the water and the city and is accompanied by information about marine life and weather.

Tom Rockwell, director of exhibits, called the entire facility “a place for gathering and learning.”
Sensory, music, human perception, physics, biology and chemistry are just some of the types of exhibits that span the length of the pier.

The Tactile Dome, a darkened maze-like space that is traversed using only touch will open this summer, along with a multi-purpose theater space that features a bar for after-hours events.

Longtime visitors will feel comfortable in many of the large gallery rooms filled with familiar items such as the big chair, black magnetic sand, pin screens, and anti-gravity mirror.

However, sprinkled throughout the old is new equipment such as a giant mirror and an exhibit called the Science of Sharing, part of the gallery of human phenomena.

Outdoor exhibits, such as a wind-measuring tower and reflecting mirrors on the Bay, will be available for free to the public as well as art displays.

A temporary fog installation by artist Fujiko Nakaya has been built into a 150-foot-long pedestrian bridge connecting Pier 15 to next-door Pier 17 and will envelop viewers in a manmade mist.

Despite the many changes at the new light-filled, waterfront museum compared to the darker, older warehouse feel at the Palace of Fine Arts, Bartels said the museum hasn’t lost its quirkiness.

Reopening Day ceremonies are set to include remarks from San Francisco Mayor Ed Lee and other Exploratorium notables, before the museum opens to the public at 10 a.m.

Museum officials advise purchasing tickets in advance. Tickets are available at exploratorium.edu/visit and will be for timed entry through September. 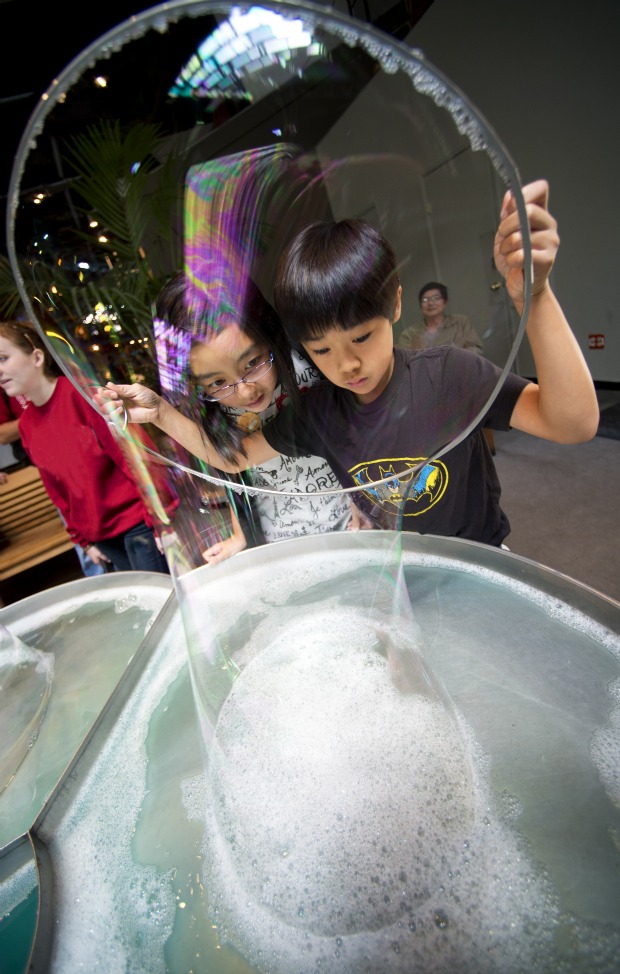 A child dips a large hoop into pans of soapy water and forms a thin film creating large bubbles on the hoop. Photo: Amy Snyder/Exploratorium