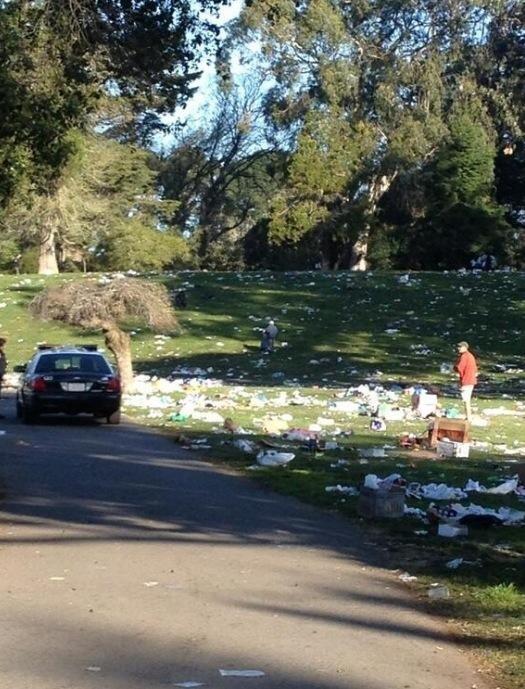 Pot enthusiasts packed San Francisco’s Golden Gate Park on Saturday for an unofficial celebration of marijuana, leaving behind a mess that city officials now say cost more than $15,000 to clean up.

About 15,000 people gathered in the area known as Hippie Hill on the eastern end of the park throughout the day, said Connie Chan, spokeswoman for the city’s Recreation and Park Department.

The first celebrants showed up in the morning with tents, coolers and barbecues—as well as bongs, pipes and joints—and the crowd continued to grow until the event culminated in cheers and a massive smoke-out at 4:20 p.m. while youth soccer games carried on nearby.

The informal gathering, held annually on April 20, was much larger this year than in recent years because it fell on a weekend day that was warm and sunny, Chan said.

The large crowds participating in the cannabis festivities left behind a big mess for city workers to clean up, Chan said.

She said dozens of workers spent eight hours on Sunday, with some having to work overtime, to clean up about five tons of trash in the park. Some volunteers taking part in the city’s Earth Day celebration also helped in the cleanup.

Ted Loewenberg, president of the Haight-Ashbury Improvement Association neighborhood group, said the marijuana celebration “was a disaster for the park and for the neighborhood.”

Loewenberg said, “Thousands of people, despite their alleged good intentions, were frankly the biggest slobs we’ve ever seen.”

He said, “It looked like a garbage truck had been detonated.”

Loewenberg said as the day wore on, many of the celebrants streamed onto nearby Haight Street.

“I was on Haight trying to walk back to my house going against the stream of people, it was like a salmon trying to swim upstream,” he said. “People were stoned, weren’t looking out where they were going, it was really extremely poor behavior.”

No major crimes were reported at the event, although eight people were arrested for narcotics sales, six were arrested for being drunk in public, about 30 received open container citations and three people were placed on mental health detentions, said police Capt. Greg Corrales from the department’s Park Station.

Chan from Rec and Park said about 120 parking violation citations were also issued as well as three for public urination and one for unpermitted amplified sound.

Loewenberg said his group wants the city to require celebrants to seek a permit to gather in the park on April 20 in future years.

“The only way such a celebration should be held in Golden Gate Park is if there’s an organizer, like any other event, who goes through the process of getting the permits and approvals, and we have the city collect fees for use of the park in that way,” he said.

“It’s just unfair that the taxpayers are the ones that get stuck with the bill,” he said.

The mess left in the park was a hot topic on social media sites, with one person writing on Facebook that people should simply clean up after themselves at the event.

However, she acknowledged that “if we are counting on stoners to remember that 5 minutes ago they had a latte and a falafel wrap in their hands, this may become an ongoing debate.”