SF DA Gascón Decks Out Office With $26,000 In Furniture 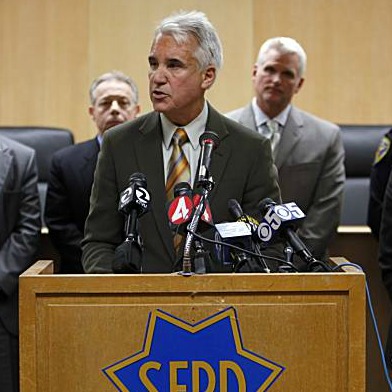 SF DA George Gascón is taking the advice of a different George (and John and Paul and Ringo) and getting by with a little help from his friends these days. As The Chron’s Matier & Ross reports, Gascón is the proud recipient of a bunch of new furniture totaling almost $26,000.

Step into Gascón’s office and you’ll find a new glass-top desk, bookshelf, and quite a few snazzy chairs. Thanks to almost a dozen donors, including ringleader Ron Conway, city protocol chief Charlotte Shultz, and former Public Utilities commissioner Ryan Brooks, there’s even a new couch in the domestic violence victims’ waiting room across the hall, the Chron says.

All gave below the legal $10,000 limit, with Conway the donation front-runner, contributing $9,999 worth of furniture. Though Gascón at least had his staff inform the city attorney’s office of his newly acquired furniture, he reportedly forgot to get the necessary approval from the Board of Supervisors. It could’ve slipped his mind or the furniture just might be that comfortable; either way, Gascón is now seeking a resolution approving the gifts.

Says a disgruntled Gascón to Matier & Ross when confronted with the motivation behind such a donation, “People have way too much time on their hands.”