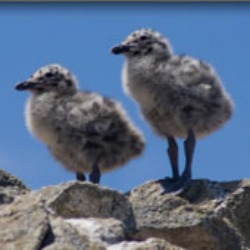 Seabird breeding season is under way, and visitors to the coast and offshore islands are being urged to steer clear of their nests.

Noisy colonies of thousands of seabirds form every spring in areas such as Point Reyes, the Marin Headands, Devil’s Slide and the Farallon Islands, according to the National Oceanic and Atmospheric Administration’s Gulf of the Farallones National Marine Sanctuary.

The colonies can be disturbed by boaters, fishermen, birdwatchers and others, and birds will neglect their young—or even abandon a colony altogether—if they are disturbed repeatedly, sanctuary officials said.

The sanctuary has worked with state, federal and local agencies since 2005 to protect seabirds on the north-central California coast.

There are 29 species of seabirds that breed in California, officials said.