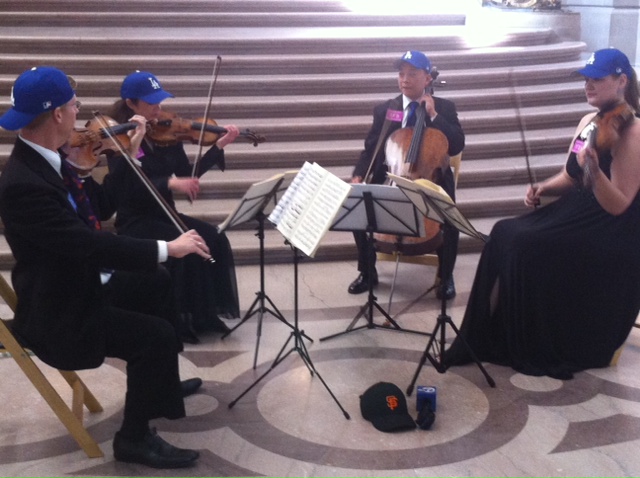 Musicians with the San Francisco Symphony played a short concert at City Hall Tuesday while wearing Los Angeles Dodgers hats to show their dissatisfaction over stalled labor negotiations with the symphony’s management.

The string quartet, two playing violin and one each playing the viola and cello, played for 30 minutes in the City Hall rotunda this afternoon before going up with other symphony musicians to meet with members of the Board of Supervisors that they hope can help with the negotiations.

The collective bargaining agreement between the musicians and the symphony ended on Feb. 15. Negotiations overseen by a federal mediator are under way, including a meeting today.

The musicians are unhappy with the management’s latest proposal, which would include a pay freeze for the first year of a new agreement and small increases in following years, said David Gaudry, who plays viola and is the chairman of the musicians’ negotiating committee.

“We’re losing ground to our better-paid peers,” Gaudry said, noting that the Los Angeles Philharmonic pays its musicians about $7,500 more annually, which was why the quartet wore Dodgers hats during today’s performance.

He said the musicians are proposing that management increase their pay by about 5 percent to address the high cost of living in the Bay Area and also contribute toward the purchase of their instruments, which can cost hundreds of thousands of dollars.

The musicians’ current compensation “kind of eradicates our ability to compete,” he said. “We have major openings in our orchestra.”

Symphony spokesman Oliver Theil said the musicians currently make an average of more than $165,000 annually, the third-highest paid orchestra in the country.

“We’re working hard to try to come to an agreement that compensates them as being the best at what they do, yet at the same time charts a way forward for the organization artistically and financially,” Theil said.

Symphony officials said the orchestra has had an operating deficit for each of the past four years and has to rein in costs.

All public concerts and events are still taking place as scheduled during the negotiations.
More information about the symphony can be found online at www.sfsymphony.org.