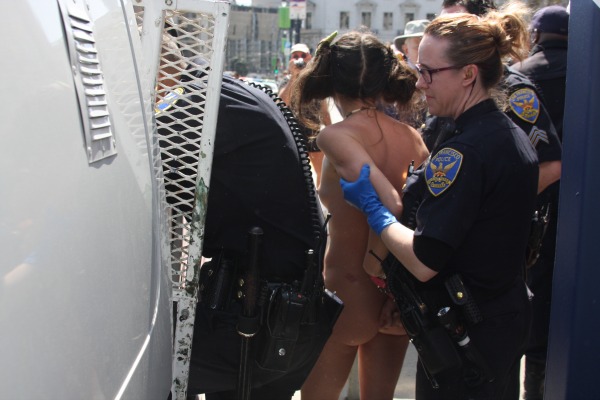 One person was taken into custody at a San Francisco City Hall protest of a recent law banning public nudity this afternoon.

Oxane “Gypsy” Taub, an activist who has participated in previous protests of the nudity ban, was cited and taken into custody by police this afternoon after she repeatedly refused to put her clothing back on. However, she appears to have been quickly released.

“I got out of jail, they released me after about 10 minutes at the police station. It was FUN!!!!! Thank you for all your love and support,” Taub wrote on Twitter this afternoon.

Taub was one of around nine people protesting today in response to a ruling by a federal judge on Thursday that rejected a bid for a temporary restraining order on the law. It is the latest in a series of such protests that occurred since San Francisco Supervisor Scott Wiener first introduced the nudity ban, which took effect on Feb. 1.

Sheriff’s deputies had warned the group of eight or nine protestors before the event that they could not appear naked without risking arrest.

Most remained fully or partially clothed, although many sported provocative outfits including g-strings and colorful, strategically placed socks. Taub herself initially sported a purple sex toy, but later removed that as well.

“The city government has declared war on the human body,” Taub said in a lengthy speech, which among other things blamed a shadow “world government” for the move to control nudity and decried Wiener as a tool of the moneyed classes.

“San Francisco is not supposed to be a boring, homogenized city like anywhere else,” Taub said later in the speech.

The deputies eventually ordered protestors to disperse after declaring the event an unlawful assembly, and Taub was cited by San Francisco police once she left the steps of City Hall.

In Thursday’s ruling, U.S. District Judge Edward Chen said in a written ruling that a motion filed by the activists Friday was not accompanied by evidence, was “lacking in details” and was “lacking in any substantive legal argument in support.”

Five plaintiffs including Taub filed the motion for a temporary restraining order together with an amended version of a lawsuit challenging the ban.

The ban went into effect on Feb. 1. Three days before that, Chen dismissed an earlier version of the lawsuit that claimed the measure violated the right of free speech. Chen said nudity is not protected speech because it is not “inherently expressive.”

The amended lawsuit claims police are enforcing the ban in an unconstitutionally discriminatory way by targeting the plaintiffs in events they organize, but not others who go nude in other events.

In addition to refusing the request for a temporary restraining order, Chen declined to set a hearing on a motion for a preliminary injunction, which would be the next step in the case, for the same reasons of lack of evidence and detail.

But he said the plaintiffs could refile a request for a preliminary injunction if the motion is “properly briefed and supported.”

Their lawyer, Cristina DeEdoardo, has said she plans to file a new request for a preliminary injunction.
The law enacted by the Board of Supervisors last year bans public nudity on streets, sidewalks and transit stations and vehicles. It makes exceptions for young children and participants in parades and fairs that have received permits. 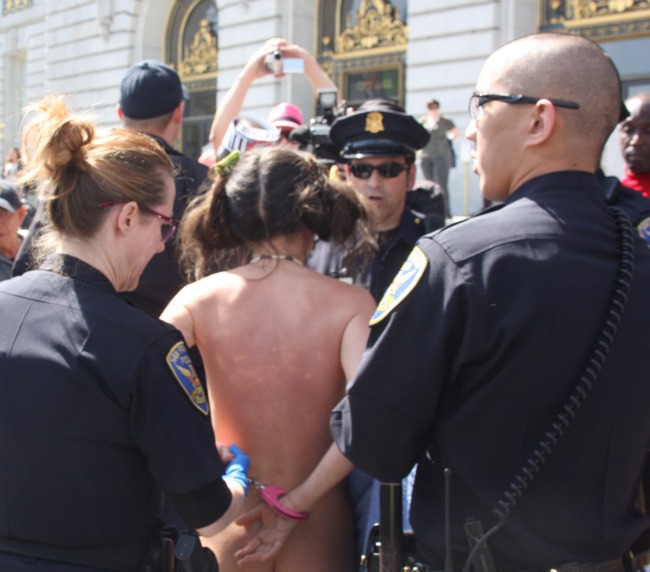