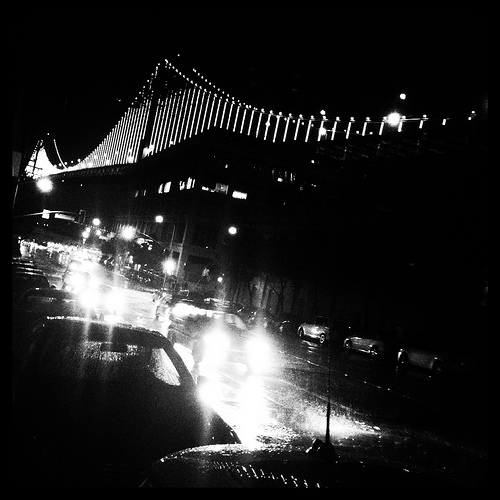 About 25,000 LED lights were turned on Tuesday night as part of an impressive light sculpture on the western span of the Bay Bridge.

“The Bay Lights,” an $8 million privately funded project created by artist Leo Villareal, will wow visitors near the bridge for at least the next two years, the artist and other dignitaries said before the 9 p.m. lighting ceremony.

Mayor Ed Lee said an estimated 50 million people in San Francisco and the North and East Bay will eventually see the lights, which cannot be viewed from cars on the bridge but will glitter in abstract patterns for about seven hours each night.

Villareal said the public nature of the lights, installed on the Bay Bridge’s vertical cables, was what attracted him to the project, which was inspired by the bridge’s 75th anniversary and took more than two years to plan, install and test.

Indeed, restaurants along San Francisco’s waterfront were booked up well before tonight by people wanting a front-row seat for the lighting ceremony.

“We have had to turn down hundreds of people,” said Duane Stinson, general manager at Sinbad’s Seafood Restaurant directly adjacent to the Ferry Building on The Embarcadero.

“There’s been tons of people asking about it,” he said.

Lee said “The Bay Lights” will serve as “a beacon for our arts community” and will complement other large events on the waterfront, including the America’s Cup sailing race starting later this year.

The mayor said he thinks the light sculpture may be so popular that people will want to keep it beyond the two years for which it has permits from state officials.

“People, including myself, will want this to be ongoing,” he said.

Ben Davis, chairman of Illuminate the Arts, the group overseeing the project, said even if the lights remain past the current two-year plan, they would likely have to come down when Caltrans does its repainting and scheduled maintenance of the bridge cables in five years.

“It’s on a living, working bridge and that bridge needs to be maintained,” Davis said. “It’s going to have to come down and another solution will have to be found or it will be an ephemeral work like it was designed to be.”

The project is still seeking about $2 million in funding, which Davis said he was confident will be raised.

“This is an amazing, forward-moving project that has momentum, and the love is just starting to mount for it,” he said.

Illuminate the Arts would have to foot the bill for any gap in the funding, he said.

As part of the fundraising effort, organizers are offering a “Gift of Light” campaign in which people can name one of the 25,000 lights in honor of a loved one.

Tuesday’s lighting ceremony was streamed live on the project’s website, www.thebaylights.org, where more than 10,000 people tuned in to see the lights come on in steady rain that began falling in San Francisco only a short time before the 9 p.m. ceremony.

Lee and Lt. Gov. Gavin Newsom joined Villareal under umbrellas as the artist turned on the installation to cheers from a crowd at the invitation-only event at a waterfront hotel.

People wishing to find out more about the project or to donate can visit www.thebaylights.org.