Countdown To Prop 8 Hearing: March For Equality Planned For Tonight 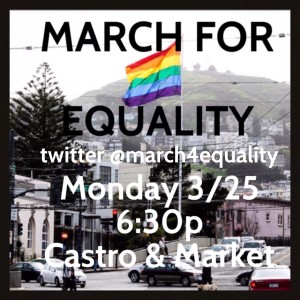 Image: We Built This City

On the eve of the US Supreme Court hearings for Prop 8 and the Defense of Marriage Act (DOMA), March4Equality is holding a march and vigil to commemorate the historic occassion.

Organized by Billy Bradford, Patrick Connors, Cleve Jones, and many others, the vigil in the Castro will begin at 6:30pm and include DJs, speeches from Supervisors Scott Wiener and David Campos, and married and unmarried gay couples telling their stories of their struggles for marriage equality. The event concludes with a march to the steps of City Hall.

Additional vigils will be held Tuesday and Wednesday, March 26th and 27th, at the California Supreme Court Building from 4pm to 8pm. Everyone is encouraged to wear red as a symbol of solidarity.

For more information and to RSVP, visit their facebook event page.

As Castro Biscuit reports, there are over 200 vigils and marches taking place across all 50 states. Buses are also transporting people to DC from nearby cities.