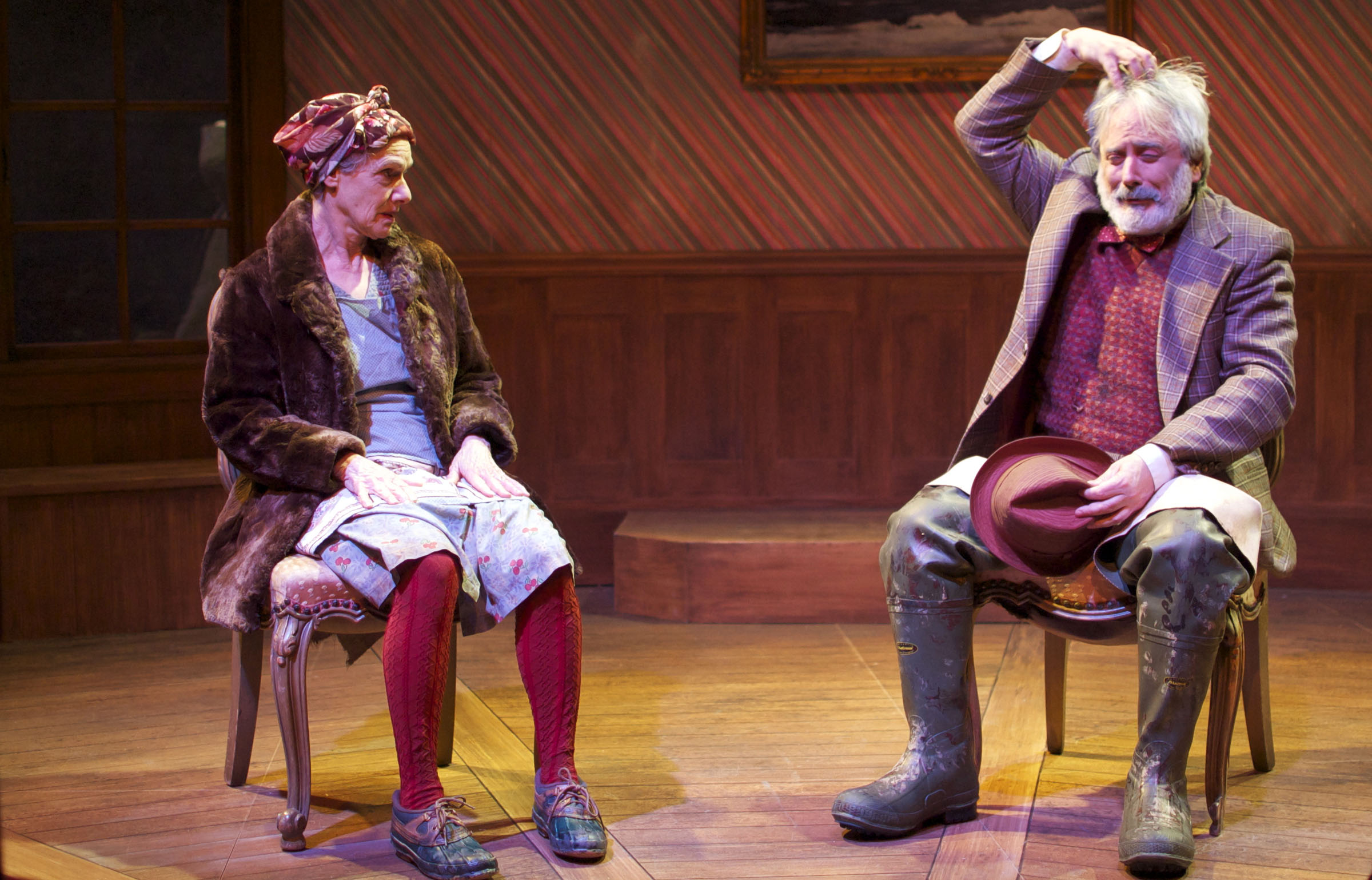 Theater of the absurd, the catchall term for the works of post-World War II writers like Eugene Ionesco, Samuel Beckett and Harold Pinter, is to my mind the paragon of modern drama. Emerging from the trauma of war convinced of the meaninglessness of human existence, these writers wound up accentuating all of the artifices that make theater what it is: characters frequently find themselves in a post-apocalyptic wasteland where nothing exists apart from the immediate scene (the nature of a stage); are ever-aware of their impending deaths (the inevitability of a play’s ending); and tend to lose their sense of free will (for their lines have already been written).

What tends to result is a disturbingly resonant mad babble, in comparison to which modern plays, narrative-forward and psychologically-driven, can feel like tapings of made-for-TV movies to which the cameramen never showed up.

Ionesco’s The Chairs, while not the playwright’s most famous work, is exemplary of the absurdist character – no doubt why Cutting Ball, one of few San Francisco companies committed to serious intellectual theater, has chosen to stage it.

The farcical play follows a couple in their nineties (the man is played by David Sinaiko, the woman by Tamar Cohn) as they prepare for and host a very large group of imaginary guests, who have assembled to hear the man’s “message” – something hinted to address the core of human existence – as delivered by a more articulate third party orator (Derek Fischer).

In a nutshell, the play is about aging. Ionesco takes the dynamic of old couples – withdrawing into a world of their own, piecing together old, shared stories and growing disconnected from the immediate present – and caricatures it here, presenting a couple that is geographically isolated (they live on a remote island, possibly after the end of civilization) and relates solely by way of imagination, drinking from imaginary tea cups, “acting out” what month it is, and ultimately throwing a massive imaginary party.

Cutting Ball’s production of the play, directed by Annie Elias (Tenderloin), is most engaging during its first third or so, during which we see the couple swing between affection and despair, as their reality begins to confuse itself with imagination and reminiscence. Changes in stage lighting and the clicking on of old-time French records usher in these transitions smoothly, bringing the intimate Exit Theater to life.

Once the guests start arriving – many of them clearly figures from the couple’s past with whom they wish to commune – the play becomes ripe for physical comedy; the couple interacts, at times quite lasciviously, with nonexistent partners and struggles to lug in enough chairs to accommodate everybody. Indeed, Ionesco himself cited the films of Buster Keaton, Abbot and Costello and the like as inspiration for how the absurd scene would play out.

And the guests keep coming, and coming, and coming. Soon the room is packed with empty chairs and the couple is crowded out of their own minds, resulting in a palpable claustrophobia. Ionesco holds it there for far longer than any modern playwright would probably dare. Ms. Elias does not mitigate the oppressive monotony of this seemingly endless scene: Sinaiko and Cohn mutter and gesticulate with a sort of stable frenzy that a viewer, with some real anxiety, feels could go on forever. Although the arrival of a third actor promises to change the dynamic of the play, the presence of The Orator turns out to be of little comfort.

To be sure, The Chairs is theater of the absurd at perhaps its purest. By bringing theater’s special artifices to light (it is really a play about people putting on a play of sorts), it ropes the audience in, at a certain point no longer merely portraying a couple in the throes of isolated-yet-claustrophobic dementia, but creating the conditions for a shared experience of such.

At the same time, The Chairs does feel like Ionesco beating a single horse well into the next world – no doubt why the play has not aged as well as richer works like Beckett’s Endgame. Even if this is the paragon of modern theater, one can’t help heaving a sigh of relief at having moved on.

The Chairs runs through March 31 at Cutting Ball Theater