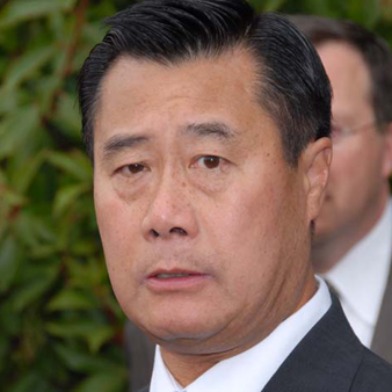 State Sen. Leland Yee said today that a death threat against him that led to the arrest of a Santa Clara County man will not deter him from moving forward with gun control proposals in the Legislature.

At a news conference at the State Building in San Francisco this morning, Yee said the incident “only further demonstrates the need to address this particular problem.”

Yee joined other state senators last week to propose a package of bills aimed at reducing gun violence in California.

A bill introduced by Yee would require assault weapons to have a 10-round limit and to only have fixed magazines that must be reloaded one-by-one from the top of the weapon.

The California Highway Patrol today gave more information about Everett Basham, 45, the man arrested Tuesday on suspicion of making the threat against Yee.

Yee received the threat by email about four weeks ago, and investigators eventually tracked it to Basham and served a search warrant at his home in Santa Clara on Tuesday, according to Scott MacGregor, chief of the CHP’s Protective Services Division.

Basham was arrested in Sunnyvale and remains in custody on suspicion of threatening a public official and various crimes related to the explosives and firearms, MacGregor said.

No charges have been filed against him yet, a district attorney’s office spokesman said this morning.

CHP officials have had to detonate some of the materials found at the home on Humboldt Avenue, and MacGregor said authorities remain at the scene today.

He said the FBI and the Joint Terrorism Task Force are among the federal agencies assisting in the investigation.

Yee did not go into detail about what was mentioned in the threatening email, but said it included “specific procedures … as to how he was going to carry out the threat.”

Yee, who said he has received racist and threatening messages before, said this was the worst one he has gotten, but added that “it makes our resolve a lot stronger.”

The push for additional gun control measures comes in the wake of the deadly Sandy Hook Elementary School shooting in Newtown, Conn. in December.