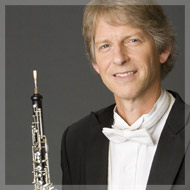 An oboist with the San Francisco Symphony has died after collapsing on stage during a performance Saturday night at Davies Symphony Hall, symphony officials said today.

The show was stopped and Bennett was taken to a hospital, where he passed away.
“I am heartbroken by the death of Bill Bennett, which has left a terrible, sad emptiness in the hearts of the whole San Francisco Symphony family,” the symphony’s music director Michael Tilson Thomas said in a statement.

San Francisco Symphony executive director Brent Assink said, “His artistry transported us. He touched audiences around the world with his music and the warmth of his personality.”

Bennett joined the symphony in 1979 and became its principal oboist in 1987.

The San Francisco Symphony is accepting condolences on behalf of Bennett’s family.

Messages can be sent to the symphony at 201 Van Ness Ave., San Francisco, 94102 or online at www.caringbridge.org/visit/williambennett.