A Berkeley Travesty: Our Practical Heaven At The Aurora Theatre Company 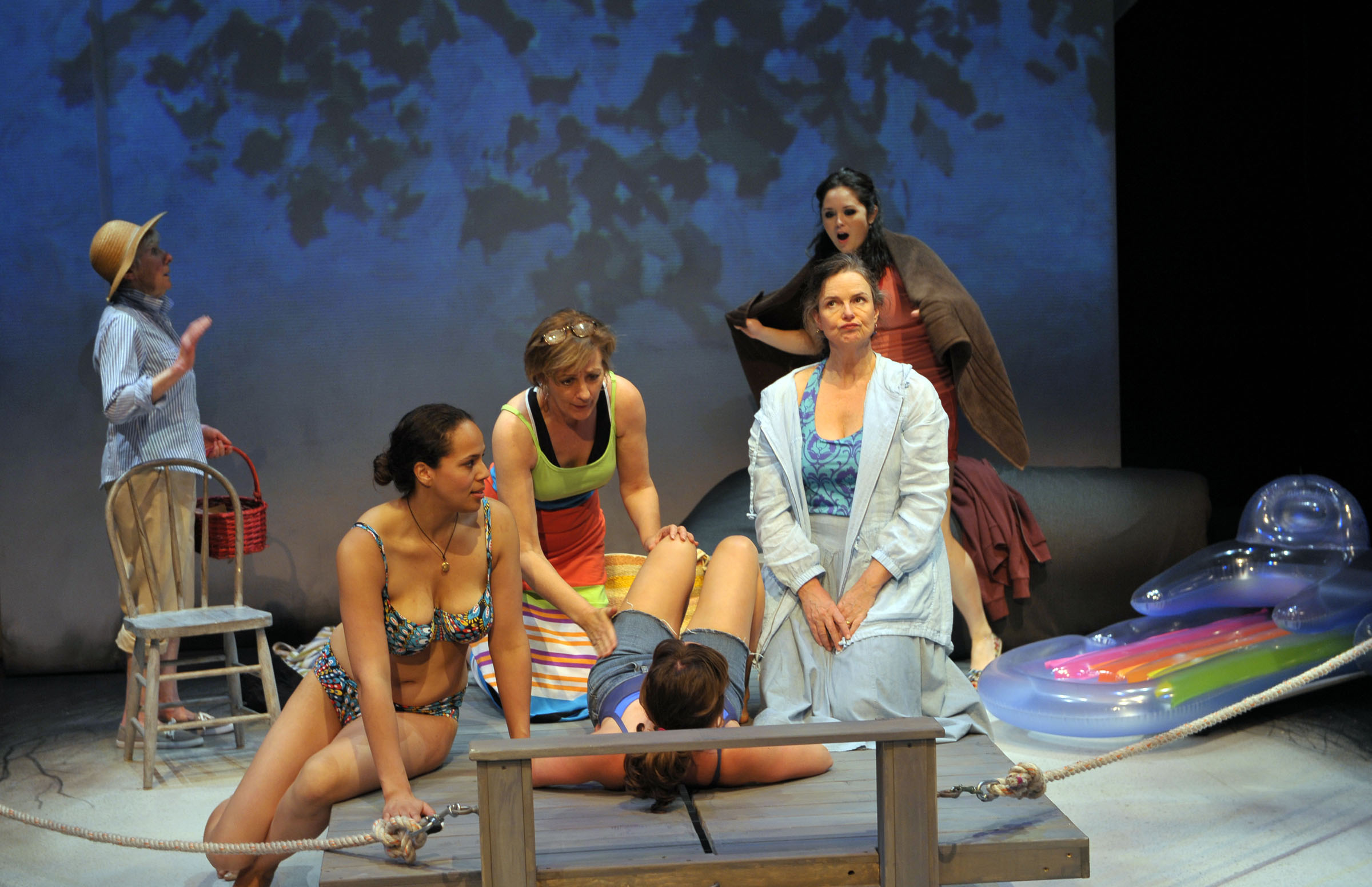 Beating out hundreds of other scripts, Anthony Clarvoe’s Our Practical Heaven received top honors in the Aurora Theatre Company’s 2011 Global Age Project (GAP), an annual festival “established to encourage playwrights to address life in the 21st century and beyond” from a “forward-thinking” perspective. I would be curious to have a look at some of the submissions that didn’t make the cut, because Our Practical Heaven really does not seem to fit the bill. Not only is it a sub-mediocre play, but its undertones are disturbingly conservative.

In the play, three generations of women gather at their family beach house on three holiday occasions. Death and divorce have cut the men out of the group, leaving matriarch Vera (Joy Carlin), her daughter Sasha (Anne Darragh) and adolescent grandchildren, Suze (Blythe Foster) and Leez (Adrienne Walters), as well as Vera’s quasi-adopted daughter, Willa (Julia Brothers) and Willa’s daughter, Magz (Lauren Spencer). They treat this house as a sort of refuge. They are all into bird watching.

Not surprisingly, much of the dramatic tension results from the group’s unconventional family structure. As aging Vera’s health declines, Sasha, who is struggling financially with the prospect of Leez beginning college, grows resentful of corporate maven Willa’s claims on the family house. Magz, meanwhile, is none too comfortable with the ambiguous “guest” status that her mother has bequeathed her. Add to that some typical generational disconnect between the worrywart mothers and their incessantly texting girls (in this production their texts to one another actually appear on-screen; it is a totally unnecessary and distracting gimmick 90% of the time), and you have the motivating factors of our story.

Clarvoe proves capable at writing the older characters, as the actors do at playing them. When it comes to the younger set, however, the playwright simply nosedives. Suze, Leez and Magz are sketchy, blank and often as preposterous as their silly names would suggest.

In the final act, Clarvoe makes a last-ditch effort to give shape to Suze’s vacuous psychology by painting her as a token lost-young-adult. Suze breaks down before Willa and, in spite of her activist leanings, begs her pseudo aunt for a corporate job – anything to give her life direction. Willa denies her, but Clarvoe grants the young character a means to surmount this humiliation without delay: by cooking a Thanksgiving dinner for the rest of the family, to everyone’s immense approval. Despite her former childish activism, Suze may just turn out to be a capable person after all – or so this saccharine scene seems to suggest.

The other two girls fare about as well. Magz finds happiness scrubbing the tar off of birds affected by an oil spill, knowingly exposing herself to dangerous chemicals in the process (this would make a great parody of martyrdom if it weren’t completely serious). Leez is not present at the play’s conclusion, but we do get word of the one fact apparently worth knowing about her first semester in college: that she has a boyfriend, and his family approves of her.

An ideological critique of Our Practical Heaven could go on for pages (a study of how Clarvoe juxtaposes Willa, the strong, selfless, cheerful conservative and Sasha, the stunted, self-centered, shrilly neurotic liberal, would have been my next order of business) but that is for another time and place.

While it is always disappointing, it is by no means uncommon for a writer to fall into conservative tropes when he cannot produce characters of real substance. But let me get this straight: as the winner of its “Global Age Project” to encourage “forward thinking,” Berkeley-based Aurora selected a script written by a man but featuring only women characters, the younger generation of which he ultimately defines by pairing one off with a man, abandoning one to tedious self-destruction and literally leaving the third in the kitchen! It would be laughable if it weren’t so contemptible.