Building off of Josef Albers‘ geometic-themed art such as “Homages to the Square,” McGregor’s whimsy pairs well with his inner mathematical artiste.

“Borderlands” layers composers Joel Cadbury’s and Paul Stoney’s “sound architecture” (what we laymen may think of as electronic whirls and ka-gigs mixed with melodious piano) and Lucy Carter’s rave-ish lighting design atop McGregor and Carter’s De Young Museum-worthy set design (for the latter, it wouldn’t surprise me in the slightest should Dede Wilsey have been consulted on the particulars).

McGregor has crafted “Borderlands” as a flurry of precise yet expansive mini-dances, each exactly four minutes long. Woven together, they present tactile, semi-tangential investigations into borders, space, direction, and time. Abandoned is any notion of propriety, prettiness, or expectation as the twelve dancers plunge into an evolving development of what shape and form allow, and how they can push those boundaries to the edge.

Especially fantastical is Maria Kochetkova, who began the night in Serge Lifar’s tutu ballet, “Suite en Blanc,” where her fouette turns churned like clockwork. What a shock, then, to see her an hour later in “Borderlands,” contorting her upper body underneath pulsating blue lights while clad in only a t-shirt and briefs, and thinking this movement–that of Kotchetkova undulating through Jaime Garcia Castilla’s arms–is the most natural thing in the world. 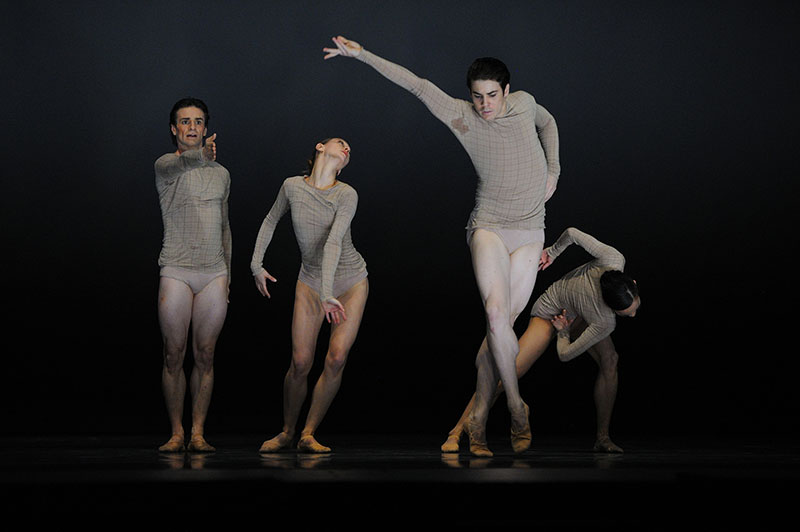 With momentum moving upward, though, it’s hard not to compare “Borderlands” to “Chroma,” especially with design similarities like a stark stage and washed out/natural costume colors. “Borderlands'” movement, too, sometimes creates a deja vu effect. But while “Borderlands” may not be as aggressive as “Chroma,” it certainly shines on its own. And with a contemporary edge, “Borderlands” encourages us to rethink how we view our place–both individually and as a collective–within the space around us.

This same program (Program 1) includes Jerome Robbins’ love-crazed “In the Night.” With three sweeping duets, Robbins’ introspective on how we love. While some of Robbins’ work may delve into cutesy or cheddar-filled cheese, “In the Night” hits notes of sophistication and adoration without piling on the schmaltz.

Kristina Lind looked mighty fine in the opening Sieste, as did Sasha De Sola as she hopped en pointe through the Serenade. But the remaining leads seemed under-rehearsed on opening night, with several bobbles and a constant expression of “Think, dammit! Think.” plastered across many faces. With many casting changes throughout the run, though, it’s likely that the dancers will become more comfortable as run continues.