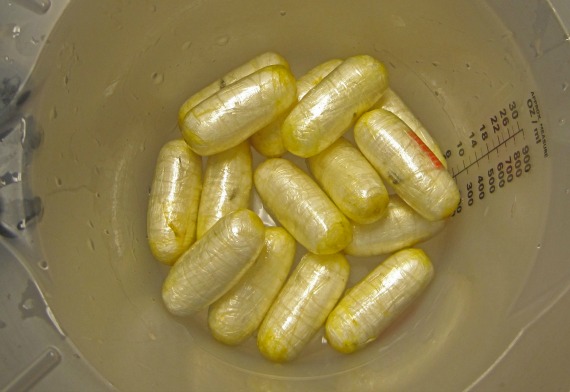 A passenger who was arrested at San Francisco International Airport in October while carrying 100 pellets of cocaine inside his body has pleaded guilty to a federal drug charge.

Emmanuel Amankwa, 55, pleaded guilty before U.S. District Judge Jeffrey White in San Francisco on Thursday to one count of possessing more than 500 grams of cocaine with the intent to distribute it.

He will be sentenced by White on April 11. In a plea agreement, prosecution and defense lawyers agreed to recommend a sentence of between five years and six years and eight months in prison, but the actual sentence will be up to White.

Amankwa had arrived at the airport on a flight from Long Beach and was attempting to board a flight to Japan when he was arrested by federal customs agents on Oct. 23.

U.S. Attorney Melinda Haag said an investigation revealed he was carrying 100 latex-wrapped pellets containing a total of 995 grams, or two pounds and three ounces, of cocaine in his body.

According to an affidavit filed by U.S. Immigration and Customs Enforcement Agent Alex Chan on Oct. 24, authorities became suspicious when a records check showed Amankwa was arrested at John F. Kennedy International Airport in New York in 1992 and later convicted of attempting to smuggle about three pounds of heroin in a false-sided suitcase.

Agents observing Amankwa in October also noticed he was walking awkwardly and clenching his stomach, Chan wrote. When questioned, Amankwa said he was a spiritual counselor from New York on his way to Japan, but gave inconsistent statements about his travel plans, according to the affidavit.

Amankwa was then detained and taken to a hospital, where he passed 81 cocaine pellets within a few hours (pictured above) and admitted to investigators he had swallowed a total of 100 pellets, Chan wrote.

Under federal law, the conviction of possessing more than 500 grams of cocaine with intent to distribute it carries a minimum sentence of five years in prison and a maximum of 40 years.