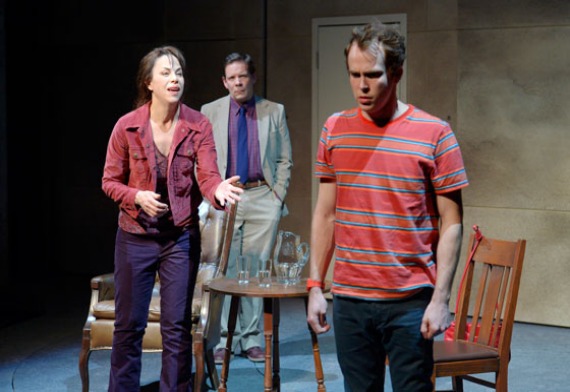 “I’m having trouble getting into the mind of a twelve and a half-year-old.”

This was more or less the feeling I was bracing for upon arriving at Berkeley Repertory Theater to see Troublemaker, or the Freakin Kick-A Adventures of Bradley Boatright. Indeed, its long and “attitude”-inflected title had dropped a lump into my stomach from the get-go. Sure enough, when lights went up after the play’s rollicking sugar high of a first act, a woman in the row behind me sighed with fatigue and announced this very frustration. Many of the Rep’s silver-haired season ticket holders looked similarly dismayed.

I, meanwhile, was completely won over. The story thus far had been consciously formulaic pre-teen riot fare, and enormously successful at that. Bradley (Gabriel King) plays a boy with an “active imagination,” devoted to the notion that he is a superhero tasked with protecting his widowed mother from the advances of Hank Miller (Thomas Jay Ryan), the recently divorced father of villainous rich kid Jake (Robbie Tann).

Bradley leads a spunky trio consisting of geeky best friend Mikey Minkle (Chad Goodridge) and saucy tomboy Loretta Beretta (Jeanna Phillips) against Jake and his A-hole goons (Matt Bradley, Ben Mehl) in a plot to thwart Miller, Sr., and all manner of cartoonish troublemaking ensues. Before long Bradley and crew are on the road, trying to escape internment in a reform school where Bradley believes the adults, including his mother, are fixing to send him for his disruptive behavior.

The dialogue is jam-packed with a unique brand of PG foul-mouthing (“dong munching A-hole” – that sort of thing) that miraculously manages not only to not be completely obnoxious, but to actually resonate as a legitimate mimesis of vulgar tween speak. The actors, all of whom are well beyond their teens (some by several decades) pull off a related feat in bringing their pubescent characters to life as both thoroughly laughable and lovable. The performances are ebullient and appropriately heavy-handed (you really see the spit fly); the comedic timing is dead on from start to finish.

One hesitation, however, did remain: Troublemaker is a rather long play — two and a half-hours with two intermissions. However enjoyable the first act had turned out to be, this duration still seemed mystifyingly gratuitous. How would the story possibly sustain itself at this pace for two more acts?

Well, this is how it goes: Act Two is a raucous odyssey involving a Nazi-run soup kitchen for pirate hobos, a budding love triangle and a slapstick drag masquerade that goes awry, resulting in Bradley falling into the clutches of the dreaded reform academy. Before he has even had a chance to hatch an escape plan, though, Act 3 yanks the play right out from under him – and the audience. Landing with a thud, we suddenly find ourselves watching an altogether different story: apparently a very serious one, about a broken household consisting of a mendacious, if well-meaning mother and an emotionally troubled son. It is the type of tired drama that involves shouts of “I wish you were dead!”, tears of remorse, hugs of reconciliation and a soft-spoken therapist. In short: an after-school special – pedestrian social issues programming that succeeds in rendering everything in first two acts completely irrelevant or deflated.

It is not “getting into the mind of a twelve and a half-year old” that is the trouble here (indeed, it is not even an issue: the viewpoint is essentially adult throughout the first two acts, even when most deeply enmeshed in the fantastic drama of twelve-year-old-dom), but rather falling into the mindset of a parent, shackled by a compulsion to wrap things up in the most deprivingly mundane, conventional way possible. One makes for great theater; the other ought to remain on daytime TV.