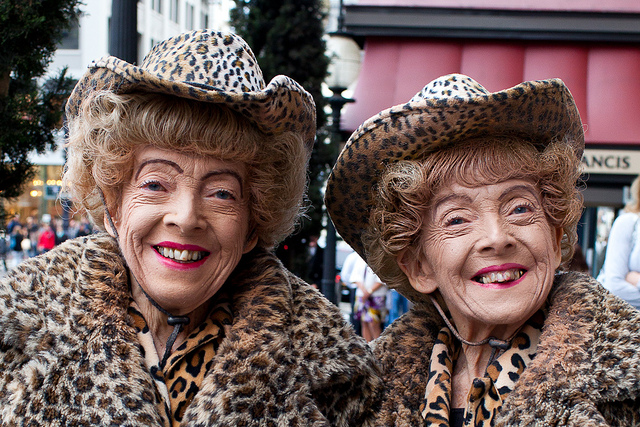 The San Francisco Brown Twins have been a major source of inspiration for me through out my life.

In all honesty, I was initially horrified by them. I worried that I would end up looking like them when I was an old woman. This was when I was in my 20s and afraid of growing old. But when I began to enjoy, and look forward to, getting older (at 35 I started telling people I was 40) they became my idols. By then I realized I could really do no better than to be like the Brown Twins.

Older women are encouraged to disappear and hide themselves away but the Brown Twins never gave into that pressure. They were not to be ignored. Their crazy matching outfits always called attention to themselves and they used that attention to make people happy. They were always kind and accessible to anyone who approached them. If you read my last article you can see what a huge effect their approach to life had on me.

My friends and I used to plan dinners so that we could sit close to the Brown Twins at Nob Hill Café. We lived for when they got a little boozy and started sassing each other. And because they were so amazing and funny I pitched a reality show about them to my agent at the time. He said to ask them if they were interested, so one day when I saw them sitting at dinner I approached them.

Of course they said no to a reality show, being too smart and too elegant to ever be involved in that trash, but they asked me to sit with them. They took the time to tell me all about the advertising campaign they had done with Harrods in London. They were two of the warmest most welcoming people I had ever met.

The last time I saw them together I knew something had changed. One of them was supporting the other as they walked down the street in front of Uncle Vito’s. What clued me in that there was something really wrong is that the one who was being helped (Vivian) had put her foundation not only on her face but over the bangs of her wig. At the moment I hoped it was a new style she was trying out, but as I walked away, I realize It was the first time I had seen either of them not perfectly put together. I became worried.

I’m heartbroken that Vivian has passed away and I hope that Marian will be healthy, happy and with us for much longer. But whether or not they are here physically, their powerfully positive influence on this city (and on me) will live on for a long long time.

Vivian Brown died peacefully in her sleep at an assisted care facility Wednesday night. She was 85 years old.