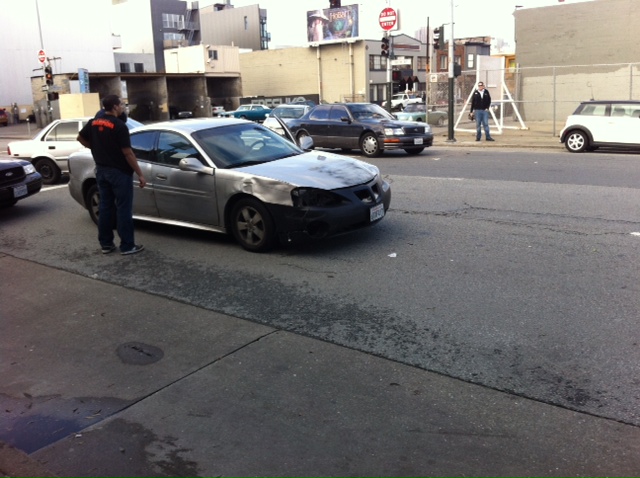 One man is in custody and a second is at large after a police chase through downtown San Francisco that ended outside a Costco store in the city’s South of Market neighborhood this afternoon, police said.

Around 2:10 p.m., plainclothes officers at Broadway and Front Street saw two suspects in a vehicle associated with a burglary, Officer Gordon Shyy said.

The suspects fled in the car, a silver Pontiac, and a police chase ensued.

During the chase, the suspects struck as many as three other vehicles, including two cars at Broadway and Stockton Street.

No one was injured in the collisions, police said.

The car eventually stopped at 10th and Harrison streets, outside Costco, and the suspects fled on foot, leaving the Pontiac (photo above)–which was missing a headlight and had scrapes along the passenger side–blocking a lane on 10th Street.

A search area was set up around the Costco. One suspect was found and arrested on suspicion of burglary, evading arrest and multiple hit-and-run offenses, police said.