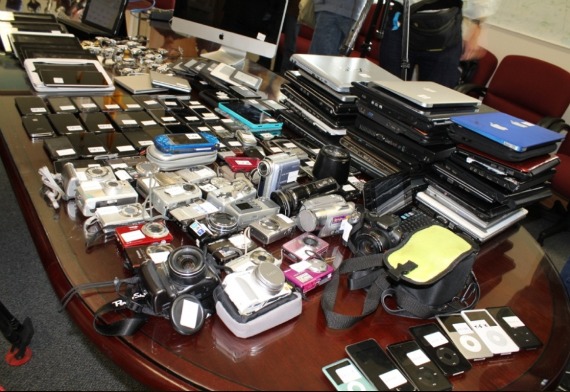 San Francisco police and prosecutors announced today that three people were arrested last week on suspicion of a large auto burglary ring that netted about $500,000 in property believed to be stolen.

Henry and Victor Gamboa, 24-year-old brothers, and Ana Bustillos, 23, were arrested on Nov. 28 at an apartment in the 400 block of Jones Street in the city’s Tenderloin neighborhood.

Investigators found more than 1,000 items at the apartment, in storage units, vehicles and other locations associated with the trio, police Chief Greg Suhr said at a news conference at the Hall of Justice today.

The items included 100-plus cellphones, more than 75 laptops, as well as other electronics and at least 100 pieces of jewelry, Suhr said.

“This is a pretty significant auto burglary ring,” he said.

Lt. Ed Santos from the department’s Central Station said the arrests of the suspects came after a burglary of a car at a parking garage near Fisherman’s Wharf on Nov. 7.

Investigators got surveillance video footage of a suspect vehicle and its license plate that eventually led them to Bustillos and the Gamboas, Santos said.

Police believe that after stealing the items from cars, the suspects would then sell them to associates who remain on the loose.

“We believe this ring is a smaller part of a bigger ring,” Santos said.

The trio pleaded not guilty on Friday in San Francisco Superior Court to 11 counts each of receiving stolen property, while Henry Gamboa was also charged with two felony firearm counts, felony possession of methamphetamine and resisting arrest, prosecutors said.

They are scheduled to return to court on Dec. 13 for their preliminary hearing.

“Whether you’re stealing or you’re fencing … you will be aggressively prosecuted,” District Attorney George Gascon said. “If you come to our city to do harm, you will be face consequences.”

Police and prosecutors advised people to not leave valuable items in unattended vehicles.

“Many were taken because they were easy to grab,” Gascon said.

Police are seeking the owners of the recovered items and are asking them to visit the department’s website to identify property that may belong to them.

Pictures of the items are available at sanfranciscopolice.org/property and victims are asked to send an email to centralstationsit@yahoo.com.