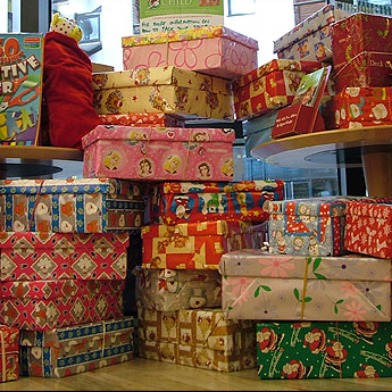 Bay Area residents who have a little bit of time and goodwill on their hands are being invited to play Santa Claus this holiday season.

Many local children have written letters to Santa as the holidays approach, and the U.S. Postal Service is making sure they get a response from the North Pole, a postal service spokesman said.

“Operation Santa” kicks off today, with the public invited to pick up a letter to Santa and respond to it with either the gift requested or a written note, USPS San Francisco area spokesman James Wigdel said.

“It’s like the ultimate act of kindness,” he said.

Anyone can come to the post office at 1300 Evans Ave. in San Francisco between 11 a.m. and 1 p.m. today or on the next two Tuesdays to view and select letters for “adoption.”

“Because Santa Claus gets so many letters–half a million nationwide–we’re looking for Santa’s helpers,” Wigdel said.

Wigdel said a majority of the letters come from children, but that needy families write hoping for warm coats and other necessities, or small gifts for children and grandchildren during the holidays.

Those who take on a letter, or a whole bundle of letters, can bring back reply letters or gifts with the proper postage to the post office on any of the next three Fridays, Dec. 7, 14, and 21, between 11 a.m. and 3 p.m.

The post office keeps children’s and families’ personal information private, and affixes a label with the full name and address only after reply letters have been returned to the post office, Wigdel said.

The “Letters to Santa” program is in its 100th year, with more than 25 other post offices participating in the holiday program nationwide.

The program also begins today in the Bay-Valley postal district based out of the post office at 1675 Seventh St. in Oakland.

Those wishing to “adopt” a letter can come to the Oakland center during normal business hours through Dec. 21. Reply letters or gifts can be brought back to the same location.