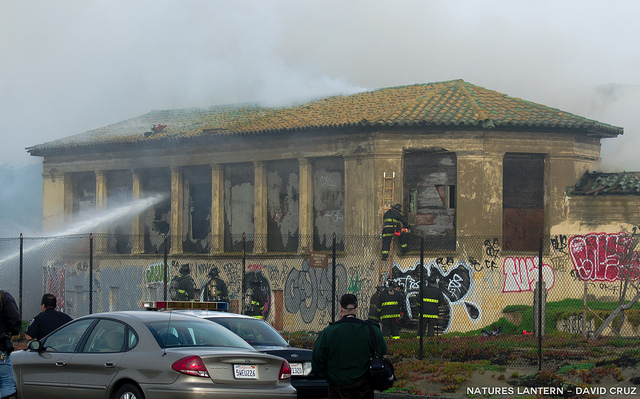 A site near the San Francisco Zoo will be transitioned into an open space area after a historic building there was destroyed in a fire earlier this month, city officials said today.

Demolition was under way today on the Fleishhacker Pool building, located along the Great Highway near the zoo’s parking lot, after it was destroyed in the four-alarm fire on Dec. 1.

Recreation and Park General Manager Phil Ginsburg, Fire Chief Joanne Hayes-White, other city officials and a descendant of the building’s namesake gathered today to announce the new plans for the site once the several-weeks-long demolition is completed.

The building, once part of a massive swimming pool complex, had been vacant for decades and had already fallen into disrepair prior to the fire, with graffiti blighting the outside walls and a barbed wire fence surrounding the site.

“It had seen some better days,” Ginsburg said.

While the area will mostly be open space, park officials will try to preserve some parts of the structure to serve as “a symbol of the great history that has happened here,” Ginsburg said.

Olympians trained at the pool in the earlier parts of the 20th century and soldiers also often trained at the site during the World War II era, according to Ginsburg.

David Fleishhacker, whose great-uncle Herbert was the building’s namesake, said while his family was always honored to have a building in their relative’s name, he was not distraught over its demolition.

City officials determined on Dec. 7 that the building would have to be demolished because it was in “imminent danger of collapse” following the fire, city engineer Fuad Sweiss said.

Hayes-White said the cause of the blaze remains undetermined because investigators were not able to fully inspect the site due to safety concerns.

However, she said the fire is “somewhat suspect” given the lack of electricity at the site and its frequent use by squatters.

Ginsburg said the tearing down of the building will last about two weeks, followed by at least four more weeks of removing the debris from the site.

The zoo was briefly closed on Dec. 1 because of traffic issues caused by the emergency response to the fire, but is not expected to be affected by the demolition work.

One firefighter suffered minor injuries while battling the blaze but has since returned to duty, Hayes-White said.