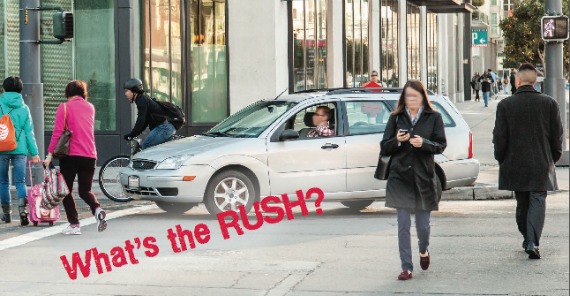 San Francisco District Attorney George Gascon today announced the launch of an advertising campaign that seeks to highlight traffic safety during the busy holiday season in the city.

The “What’s the Rush” campaign is placing ads on San Francisco Municipal Railway bus shelters and on buses for the month of December.

“We still have way too many people getting hurt on our streets,” Gascon said.

The ad campaign encourages motorists, bicyclists and pedestrians to increase their awareness of their surroundings by showing photos taken of some of the bad behavior on city streets.

“Frankly, we had an excess number of photos,” Gascon said. “It was just that bad.”

The campaign comes during the holiday shopping season when the city’s streets and sidewalks are often more crowded than usual.

“The higher the density, the worse the behavior,” Gascon said.

The ads, funded with $25,000 from the district attorney’s office, are in English, Spanish and Chinese languages.

“We all have to work together to reduce traffic collisions,” he said.

San Francisco historically has the highest per-capita vehicle-pedestrian injury collision rate in the state, and had 17 pedestrian fatalities in 2011 alone, according to the district attorney’s office.

Just hours after Gascon’s news conference this morning, yet another pedestrian was fatally struck in the city, this time at Market and Beale streets.