N and J Line Rail and Street Improvements
The continuation of track improvement work on the Muni Metro system will start Friday, and will require bus substitution on the N Judah Line and disruption to the J Church Line during the weekend of Nov. 17.

The Nov. 17 weekend work on the Church & Duboce project will include track replacement inside the Muni Metro Tunnel at Duboce Portal. Should weather permit, crews will apply red paint on the center lane of Church Street from 16th Street to Duboce Avenue to make it a transit-only lane. This painting project is part of the Church Street pilot program which aims to reduce delays and improve service reliability for the J Church rail line and 22 Fillmore bus route.

During construction the N Line will be shut down with substitute service provided by bus from Ocean Beach to Church Street at Market Street.

No N Line or J Line service will operate in the Metro subway; however, S Shuttles will provide supplemental rail service between West Portal Station and Caltrain Station at 4th and King streets.

Muni Service Impacts
N Judah Bus: N Judah bus will operate all weekend between Ocean Beach and Church Street at Market Street. From La Playa to Cole Street the N buses will follow the regular N Line route and stops. The service will run as an express between Cole and Carl streets and Castro Street and Duboce Avenue.

J Church: Rail service on the J Church Line will only operate between the Balboa Park Muni Metro/BART Station and Church and Market streets. J Church customers can transfer at Church and Market streets between regular J Line service on the street and Metro subway service provided by the K, L, M and T lines between Church Station and Embarcadero Station.

Traffic Impacts
Streets will remain open to cars, bikes and/or pedestrians during the track work on Duboce Avenue

Weather permitting, center lane on Church Street between 16th Street and Duboce Avenue will be closed from 12 to 4 a.m., Saturday and Sunday for the paint work

Local access will be granted and all local businesses will remain open.

Treasure Island Street Closure
On Saturday the following street closure will be required between 6 a.m. and 6 p.m. for an event at the San Francisco Gaelic Fields on Treasure Island: Avenue “H” between 11th and 13th streets 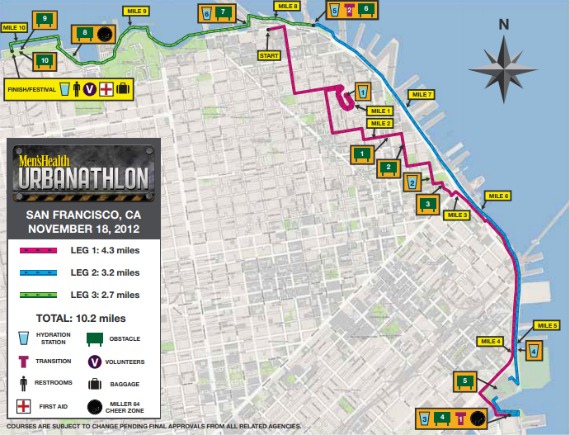 Men’s Health Urbanathlon
On Sunday the Urbanathlon 10K race will begin at 7 a.m. from Jefferson Street west of Mason Street and finish at the Marina Green.

Street closures will be required throughout the race area, only major closures are listed below. Local business and residential access will be allowed with possible delays.

From 3 to 10:30 a.m.:
?? Jefferson Street between Westerly Terminus and Powell Street

From 3 to 9:30 a.m.:
?? Telegraph Hill Boulevard between Lombard Street and Pioneer Park

From 7 to 10 a.m.:
?? Northbound 3rd Street between King Street and Terry Francois Boulevard

49ers Football Game
The San Francisco 49ers will host their eighth home game on Monday, against the Chicago Bears starting at 5:30 p.m. at the Candlestick Park.

Muni customers may purchase their fare in advance. SFMTA staff will sell Muni fares from 2:30 p.m. at the following locations: