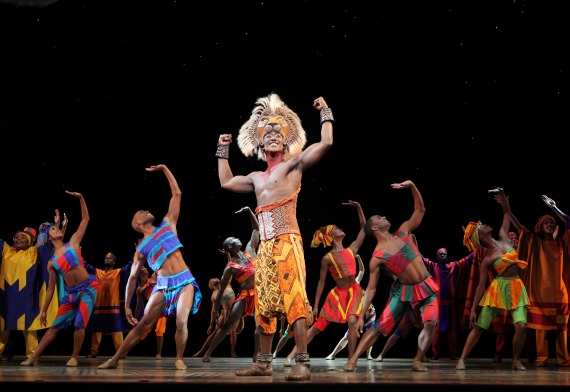 Break out the leopard prints, ladies; The Lion King is in town.

I’ll start by saying that reviewing this play is pointless; as with most everything in the fastidiously mechanized and brilliantly packaged world of Disney, you know exactly what you’re going to get: in this case, an exuberantly uplifting, visually stunning and (par for the course Disney) slightly racist show of talking animals acting out a Hamlet/Macbeth hybrid.

Call me hypercritical, but I spent the first half of The Lion King, which I hadn’t seen since age 10, being appalled by the story’s ideological overtones. To recap, the story begins with the equitable but firm patriarch, King Mufasa (Dionne Randolph), reigning over the “pride land,” while evil brother Scar (Derek Smith) jealously eyes the throne. Scar has found a political soapbox making hollow promises (“you’ll never go hungry again”) to a marginalized population of hyenas (who are portrayed as lazy, idiotic parasites, and coincidentally speak in heavy African-American dialect) living in the shadowy border region. Backed by the hyenas’ brawn, Scar commits regicide, banishes the king’s son, Simba, and assumes the throne. As king, he allows the hyenas to enter the pride land and, for reasons not explained, the economy then goes to pot. It is up to Simba to reclaim his place in the monarchy and restore order by getting rid of Scar and the hyenas.

So, to be clear, we’re rooting for the survival of a monarchy that apparently depends upon the coercive marginalization of an underclass. The last musical I saw at SHN, Les Miserables, asked the audience to do the exact opposite.

But apparently it only takes one good rendition of “Can You Feel the Love Tonight” to completely melt one’s intellectual guard, because not long into Act 2 I had come to terms with the story and found myself enraptured by the production’s spectacular sounds and colors. Such is the power of Sir Elton.

The Savannah setting casts the stage in a melting procession of blues, purples, mauves and deep orange; the world of The Lion King is never far from a brilliant sunset or spectacular dawn. The stage abounds with actors leaping in animal print leotards or seamlessly controlling elaborate puppets – a much more amusing bunch than the grave equines in War Horse.

Performances were great across the board (although it’s hard to imagine any stage Scar living up to Jeremy Irons’ seethingly aristocratic voice-over work for the film), in particular the wise, if unhinged, baboon Rafiki (Buyi Zama), whose wild babble lit up the stage and was far more humorous than Timon (Nick Cordileone) and Pumbaa’s (Ben Lipitz) incessant fart jokes.

The Lion King is an exuberant display of emotion, color and sound. Despite it being a perhaps deeply reprehensible text, you won’t be able to help enjoying the show.

The Lion King runs through January 13, 2013, at the SHN Orpheum Theatre.