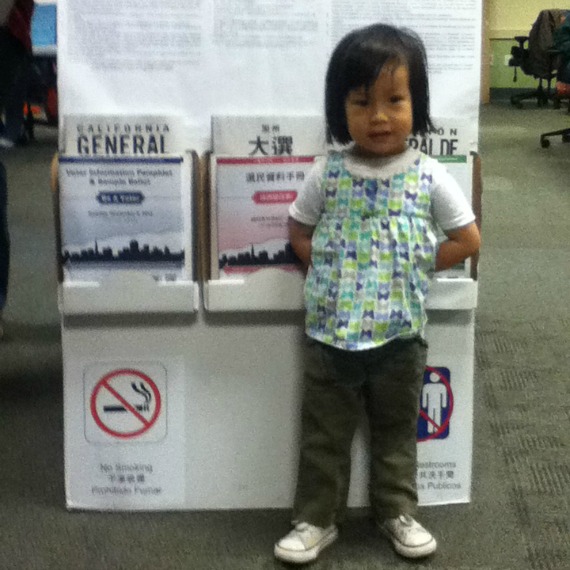 I am sure that you already know that today is Election Day for the 2012 Consolidated General Election! While many San Franciscans have already submitted their vote-by-mail ballots (you must drop them off at any polling place in San Francisco before 8 PM Tuesday), others prefer the experience — and of course, the sticker — you get at your local polling place.

According to David Elrod, his Nob Hill area polling place was crowded, with “people voting on tables with no privacy.” He says things were well organized and “super fast.” The only complaint he had was “that I heard some polling places had donuts.”

Beth Spotswood went to her Mission District polling place at 9 AM, “and there was a little line, but no waiting really. We just had to wait for people to check-in. It was mellow.”

“I did run into my current neighbor and former co-worker while wearing a baseball hat and no make-up,” Spotswood reported. “So, there’s something to be said for voting absentee.”

Rita Hao says that “It looked like maybe around 50 people had voted” at her Mission District polling place “when we got there (around 8:30 AM), and this was our first time voting in District 9 (we just got zoned out of 6).”

“I left the ballot for Campos blank. I am not voting for a domestic violence apologist, not now and not ever, ” Hao said, in reference to David Campos, the unopposed D9 candidate who voted against the permanent removal of Sheriff Mirkarimi from office last month.

“Two people ahead of us were voting for the first time ever,” Hao said “and it was crowded enough that I didn’t actually have a little privacy booth to vote in, so we voted sitting on the floor. I VOTED! stickers, as always, (were) in hot demand, including by the toddler” (that’s Hazel, pictured above).

1031 Franklin St was kind of a shitshow this am. Woman in charge was super loud, almost shouting at workers. Very distracting. @sfappeal

Rain Jokinen, who says that three of the sites she tried to find her polling place “couldn’t find mine,” reports that her Nob Hill area polling place was packed by 7:55 this morning.

“There were about 8 booths in a tiny garage, and five or six people waiting in line,” Jokinen said. “It was pretty efficient, but again, CRAMPED. Took me about 15 minutes total.”

“One interesting thing was a woman who lives next door to the polling place, and had voted there before, was now redistricted to another polling place blocks away, which, what?”

“It was at an elementary school, Kuchar says. “It kind of makes you think a little bit harder when there’s a pack of children playing outside your polling place.”

Christine Borden reports from the comments that things were “pretty quiet” as she dropped off her ballot at her NoPa (“where the District 5 supervisor hopefuls have been campaigning in full force”) polling place at 9:45 this morning.

“No line and a few people voting at booths, Borden reports. “The poll workers were really friendly and helpful and I was in and out within 2 minutes. Super easy!”

At noon, my Outer Sunset polling place had no line, but I nabbed the last (of seven) privacy “booths.”

While I was voting, a uniformed SFPD officer came in, asked if he could vote there even though it wasn’t his polling place, then got shitty with the teenaged election worker when she offered him a provisional ballot. When the adult pollworker intervened in an attempt to explain, the police officer snapped “that’s the stupidest thing I’ve ever heard” and walked out. Drama!

@sfappeal Our Noe Valley polling place was busy but no line. Very efficient. 9:15am had no waiting at all. Must be an absentee neighborhood

Polling places will be open from 7 AM to 8 PM today. If you can’t figure out your polling place, registered SF voters may also come to City Hall’s Department of Elections today to vote in person.

After the polls close, there are plenty of parties to hit (SFist has an invaluable list of election night shindigs).

According to the Department of Elections, unofficial results for San Francisco races will be released around 8:45 PM, with updates occurring throughout the evening. All results will also be available at sfelections.org.

How were things at your polling place? Drop us a line, @ us on Twitter, or let us know in the comments and I’ll add your report to this story.