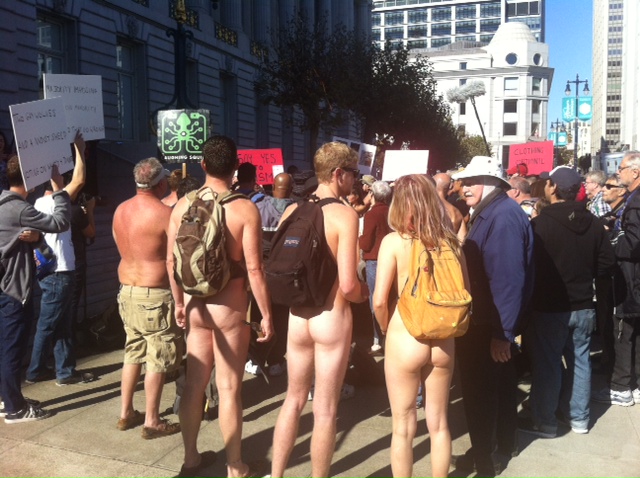 A group of nudists today filed a lawsuit in federal court seeking to stop the San Francisco Board of Supervisors from passing an ordinance next week that would ban nudity in the city.

The supervisors are set to vote Tuesday on a proposal by Supervisor Scott Wiener that would prohibit the display of genitals or buttocks in city plazas or parklets. The ban would also apply to sidewalks, streets and public transit.

Wiener has said he feels the legislation is necessary to address a growing group of nudists who frequent Jane Warner Plaza in the city’s Castro District and have drawn complaints from residents and business owners.

But the nudists–more than a dozen of whom stripped down for a rally in front of City Hall today before filing the lawsuit–said they strongly oppose the proposal.

Gypsy Taub, one of the organizers of the rally who took off her clothes at a board committee hearing on the issue last week, said the legislation would “take away our freedom to be ourselves in our own city.”

The group also had clothed supporters, including gay activist Michael Petrelis, who said the nudists “help the economy of the Castro and keep the neighborhood unique.”

Christina DiEdoardo, the attorney representing the group, said the lawsuit seeks to stop a “fatally overbroad” piece of legislation that would infringe on the nudists’ First Amendment rights.

DiEdoardo likened the ordinance to a proposal to impose a dress code on the city.

“It’s like saying the only colors people can wear in October are orange and black,” she said.

The nudists drew a crowd of gawkers in front of City Hall before they marched to the federal building on Golden Gate Avenue to file the lawsuit in U.S. District Court.

Organizers said they are planning another rally in front of City Hall at noon on Saturday before Tuesday’s vote on the legislation.

“I think people have gone a little bit too far,” Lee said. “We’re talking about much more than First Amendment rights–people have gone overboard with their exhibitionism.”

The legislation would still allow for public nudity during permitted events such as the Folsom Street Fair and the Bay to Breakers race.

It would establish fines that start at $100 and increase for additional offenses within a year. Violators would not be required to register as sex offenders.

The board last year passed another piece of legislation by Wiener that banned nudity in restaurants and required nudists sitting on benches or other public seating to first put clothing or other material atop the seat first.