Mesmerizing from Every Angle: The White Snake at Berkeley Rep 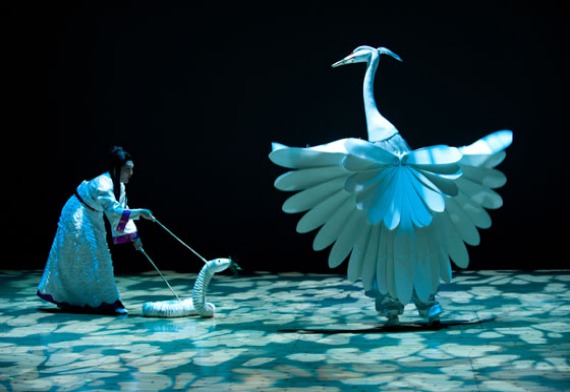 It’s the holiday season. Your family is in town, and now that you’ve seen Lincoln, you’re seeking something more spiritually fulfilling than the silver screen. This makes November and December a big season for theater, and tasks companies with pulling out sufficiently spectacular, fun-for-the-whole-family productions.

Last year, Berkeley Repertory Theater staged the excellent Wild Bride (which will be back by popular demand this January), a devilishly adult-oriented folk tale. This year they swap bluegrass for bamboo: The White Snake is Tony Award-winning director Mary Zimmerman’s take on a Chinese fable. It is also excellent.

White Snake (Amy Kim Waschke) and Green Snake (Tanya Thai McBride) are two immortal beings – serpentine – itching for a daytrip away from their higher, ascetic plane to experience the earthly world and taste its material pleasures. So they metamorphose into women called “Lady Bai” and “Greenie” and hike down.

Lady Bai immediately falls in love with a pharmacist, Xu Xian (Christopher Livingston), and her daytrip soon becomes a long haul. They marry (the puerile and perhaps a little dim-witted Xu Xien hasn’t an inkling of his wife’s true form) and things are good for a while until a meddling, holier-than-thou Buddhist monk , Fa Hai (Jack Willis), catches on to the masquerade and vows to send the “demon spirit” back from whence she came. The ending, though ultimately (in the most zen sense of the word) happy, falls pretty far outside the Disney model of tidy satisfaction.

Wrapping up in an hour and forty minutes, the story unfolds at a strong and steady velocity. Zimmerman’s sharp dialog seamlessly structures contemporary language according to the traditional, rhythmic style. This renders Lady Bai as mythical as she is relatable, and Greenie, a firecracker and fount of impetuous, squeaky verbosity, makes for one of the more endearing BFFs in recent memory. The jaunty and melodic verbal flow remains unbroken but for Fa Hai, who, speaking with an ugly American drawl, drops his every line like lumber. Annoying, but appropriate: he is the character you’re supposed to hate, as well as (and in consequence of being) the reminder of the greater social body and its shackling needs.

But The White Snake‘s greatest spectacle is visual. The actors move with tight choreography about a stage that is almost painterly in its vivid scenic beauty. Projections of blossoming boughs and swelling waves animate the large back wall, providing symbolic undergirding for the story at hand. The characters are ushered in and out of doors by simple but miraculous changes in lighting. When it rains, blue streamers unravel from the ceiling as an ensemble character drops hard beans into a bucket. This is a degree of elegant ingenuity to which all scenic designers should aspire.

Oh, and there are puppets – slinky, two-handle snakes. Like most everything else about The White Snake, they are as simple as they are mesmerizing.