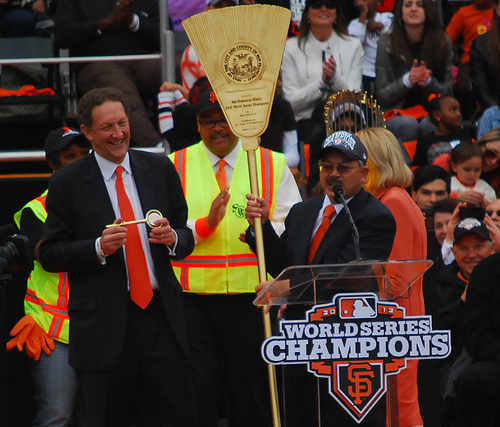 Though the mayor’s office doesn’t know/isn’t telling how much yesterday’s parade celebrating the SF Giants’ World Series victory might cost the city, other local agencies did have numbers to share on things like yesterday’s transit ridership and arrests.

According to BART, the transit agency had its highest daily ridership ever on Wednesday.

Not every local agency had the numbers from the 2010 parade at hand, though. When the Chron asked Mayor Lee’s office how much the parade was expected to cost San Francisco, they appeared to be stumped.

The Giants pay for the parade itself, which the organization said would cost about $1 million. San Francisco has to cover the rest of the costs, for things like police and safety, transit, and the post-event cleanup.

Lee had said earlier that he expected the San Francisco to have to shell out about as much for this year’s event as we did in 2010. OK, so how much was that? According to the Chron, the mayor’s office didn’t know.

Caltrain and Golden Gate Ferry also hit ridership highs Wednesday, according to spokespeople. About 22,000 exited Caltrain at Fourth and King Wednesday, up from the usual 9600. About 6000 people took a ferry to SF yesterday, while on a typical weekday the service carries about 5000 riders all day.

It seems like all those extra riders were indeed headed to the parade: Police Chief Greg Suhr says that he believed that approximately one million people lined up along the parade route and in Civic Center.

SFPD spokesperson Sgt. Michael Andraychak says that according to preliminary numbers, 22 people were arrested in the midst of the parade and celebration.

Several lost children were also reunited with their parents at one of the “Re-unification centers” at the celebration, Andraychak said.