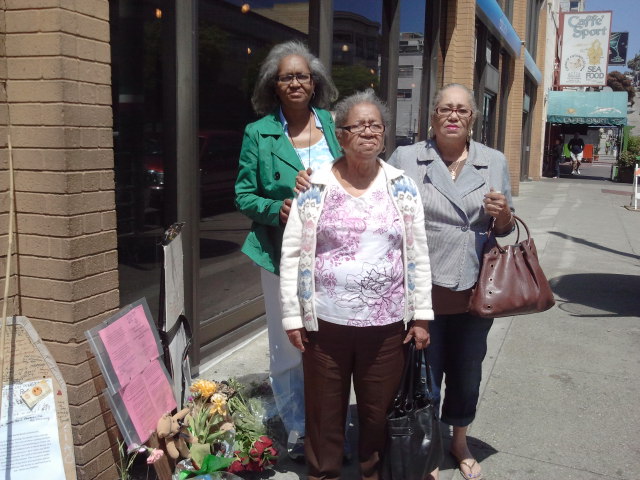 The family of a homeless man who was seriously injured in a hit-and-run collision in San Francisco’s North Beach neighborhood in May is asking for the public’s help in finding a way to get him back to their home in Alabama.

Selester “Les” Rowe, 62, was hit by an SUV the night of May 12 at the busy intersection where Columbus Avenue meets Stockton and Green streets, police said.

Rowe was walking east across Columbus when he was hit. He suffered major injuries, including a fractured spine, brain swelling and multiple broken bones, but has since recovered enough to go home, said his sister, Headercine Rowe Russell (pictured right).

However, with no family members living in San Francisco, the family is seeking a way to have him transported back to Alabama where they can take care of him, Russell said.
“We think he would probably be better at home with family,” she said.

The problem, Russell said, is that it would cost at least $20,000 to fly him with a nurse on board–money the family does not have.

The family received some money from North Beach businesses and residents who considered Rowe a friendly presence in the neighborhood. After the accident, they raised money to help pay for Rowe’s medical bills and other expenses, said Paulina Krol, who helped organize the fundraising effort.

Russell said she wants to use the donated money to take her brother back to Alabama, rather than spend it on family members making repeated trips to San Francisco. She is asking for any assistance that will help get him home.

“We’re going to do what we can on our end, but anyone willing to help us in any way, we’d be more than happy to accept,” Russell said.

Police today did not have any more details about the hit-and-run suspect or vehicle, which had previously been described as a late 1990s-model white Chevrolet SUV, possibly a Suburban, with tinted windows and a California license plate ending in “24.”