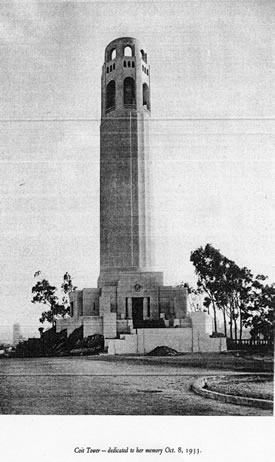 As renovations get under way at San Francisco’s Coit Tower, descendants of both the landmark’s namesake and one of its muralists met today to inspect the repairs and also learn about a case of censorship that was recently found on one of the murals.

The city in May set aside $1.7 million to repair the column on top of Telegraph Hill that was funded with money left behind for civic beautification by Lillie Hitchcock Coit when she died in 1929.

The repairs were prompted by a report commissioned by the city this spring that found damage to the structure of the tower, including a leaky roof on the second floor, as well as water damage and other issues with murals that had been painted by a group of artists in 1934.

Susan Coit Williams, the great-great niece of Coit, was in town from Dallas today to survey the renovation and was joined by Ruth Gottstein, the daughter of artist Bernard Zakheim, whose mural “The Library” is featured on one of the walls inside the tower.

Coit had no children so the legacy of the tower continued through her nieces and nephews and their children.

“That’s my family,” Williams said. “It’s very overwhelming and I always want to make sure I’m respectful and cognizant of what it means to everyone.”

Gottstein, who is depicted as a young girl wearing a blue blouse in “The Library,” recalled visiting the tower and smelling the wet plaster as the artists worked on the murals over a few weeks in 1934.

“It was an extraordinary time,” she said. “In every way, this tower is San Francisco history.”

Jon Golinger, chair of the Protect Coit Tower Committee, today also revealed that one of the murals by John Langley Howard depicting a labor march initially had a man holding a communist newspaper in the painting, but that the newspaper was later covered with paint to hide it.

Golinger said that mural and others generated controversy at the time because they “did not gloss over” the social issues of the day.

Golinger’s group put an advisory measure on the June ballot that voters passed to encourage the city to limit commercial activities at Coit Tower and use more of the revenue gained from the tower on its upkeep.

He said the repairs to the roof began in the last week of October and most of the other repairs will begin in January.

Gottstein said the work will help preserve what her father and others created decades ago.

“This is truly a gift to the city and we have to protect it,” she said.