Contemporary instrumental bands have pigeonholed themselves into one of two categories: either as unabashedly electronic or shamelessly acoustic. Blending the two can be a challenge for almost any artist. Those who perform effectively in front of a synth may shrink and wilt when faced with a piano, while an accomplished pianist’s compositions may fall flat when played on a Moog.

The Bay Area has consistently appreciated that type of dichotomy with concerts like Neil Young’s eclectic Bridge School Benefit, which unplugs everyone from Metallica to David Bowie, putting them on equal acoustic footing. The perennially idiosyncratic Hardly Strictly Bluegrass Festival does its part as well. Each year’s offerings seem to stretch the boundaries of what a music festival can be.

And yet there’s that ever-present all or nothingness in allowing electric performers to unplug instead of using pick-ups and effects. The divide still stands when an elecroclash group is pitted against a neo-folk ensemble as they take separate stages at the same time rather than watching the two coalesce.

Very few artists seek to bridge such a gap; even fewer do so effectively. Enter New Jersey native Delicate Steve, hot off the heels of a successful CMJ showcase and coming to the Rickshaw Stop this Friday, November 23. Barely entering his mid-twenties, Steve Marion is the man behind the multi-layered sounds that made his latest album, Positive Force,a critical success.

Released in July, Positive Force is a thoughtful addition to the Delicate Steve catalog, amping up his signature guitar work with a bit more slide and layer upon layer of glorious melody, recalling such iconic artists as the Beatles and the Beach Boys and giving them an ambient, instrumental groove.

Marion soon toured in support of the LP, and playing earlier this year in San Francisco at the Mission’s Brick and Mortar.

“I love San Francisco,” Marion tells The Appeal. “I’m really just excited to walk around the city, take it all in, and eat good food.”

Many of Delicate Steve’s previous tourmates have inspired much admiration and song ideas, and none stronger than Marion’s collaboration with Ra Ra Riot for Record Store Day, whom he initially toured with last fall. “We really hit it off,” he says.

Upon completing the tour and entering a new year, the Record Store Day exclusive was soon recorded at Converse Rubber Tracks Studio in Brooklyn. The record was to be a two song endeavor, with both bands choosing a different song to collaboratively cover.

Ra Ra Riot picked Steve Winwood’s iconic 1982 hit “Valerie” while Delicate Steve chose “The Big Ship” by Brian Eno. As Marion explains, “We tracked the Steve Winwood song [“Valerie”] separately but with that Brian Eno track [“The Big Ship”] we just got in a room and recorded it all together, live…It made for a different vibe for both songs.”

Delicate Steve was happy to be a part of the Record Store Day effort as an alternative to the current way that audiophiles get their music. He’d made previous avant-garde efforts when staging an advanced release of Positive Force by placing individual tracks on buttons across New York.

“It was a good way to get more people to talk about this; a scheme where listeners would have a map and they could bring their headphones to find the songs and hear them before the album was released. Streaming is currently the norm,” Marion said. “It used to be special to go onto, say Myspace or NPR and hear an album for the first time before its release. Now I feel like it’s really important to find ways to get more of a surprise.”

Expect the same jolt of creativity to inform Delicate Steve’s live performance as well. Backed by a four-piece band, those same entrancing songs are instantly elevated to larger-than-life soundscapes. Soar through guitar riffs, vibraphone samples, and rolling drums with Marion as your musical guide.

Though usually soft-spoken and mild, Delicate Steve’s stage presence is commanding of attention with a self-assured swagger that immediately carries audiences. It’s the type of show where even the coolest of hipsters may find themselves dropping their PBRs in awe and never once thinking of taking out their phones, save for maybe recapturing this musical moment with photos and video. 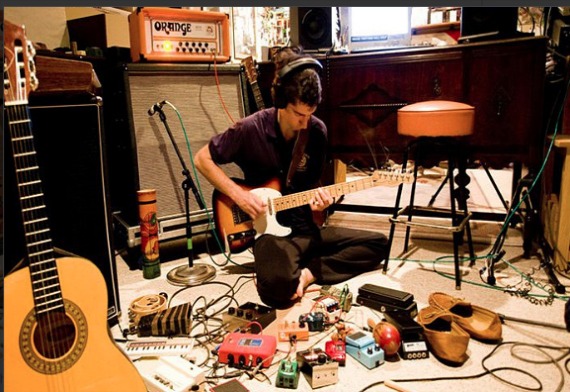