Weekend Traffic And Transit Disruptions (Map): Pretty Much Everything, All At Once 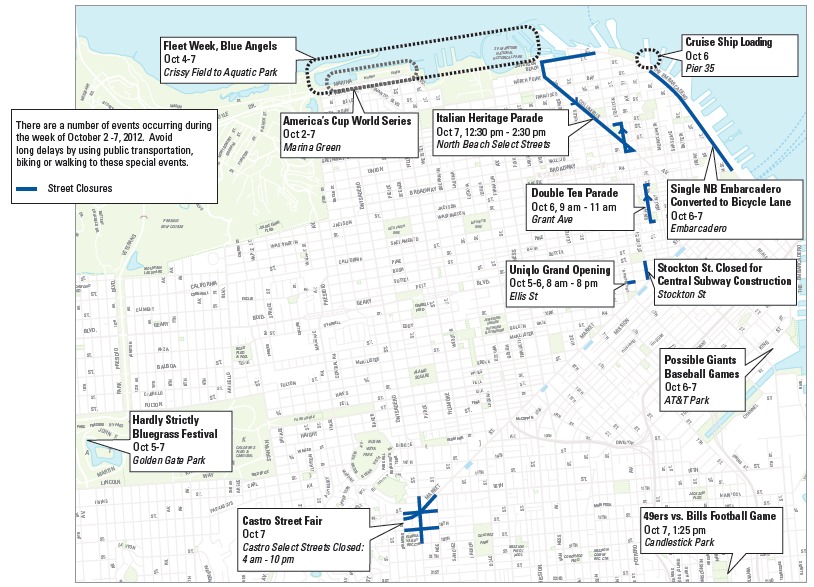 Embarcadero Lane Closure
One lane of northbound Embarcadero between Washington and Bay streets will be converted to bicycle use only to provide better bike access to the waterfront events and, as needed, emergency vehicle access, on Saturday and Sunday.

Stockton Street Closure
Stockton Street will be closed between Geary and Market streets as part of the on-going Central Subway construction. A cruise ship will unload and load on Saturday at Pier 35, adding to congestion on The Embarcadero.

Approximately 300,000 people are expected to attend. All Muni lines in the event area will experience increased ridership and traffic.

To accommodate the crowds for these events:

The F Market & Wharves will be supplemented by an F-line shuttle Saturday and Sunday; The F line shuttle will operate from Spear Street and Market Street to Pier 39. Passengers at the Embarcadero Station should use exit B-4.

The E-Embarcadero streetcar line from Caltrain Depot will run on Saturday and Sunday;

From Thursday through Sunday, the SFMTA will supplement service on the 47 and 49 routes with the 47L Van Ness Limited-Stop special bus service;

On Saturday and Sunday, the 47 Local will receive additional service (tentative, based on need);

Ample bicycle parking will be provided.

The SFMTA will provide complimentary access to Muni service for all military personnel (with Military ID or in uniform) in honor of Fleet Week.

Over the weekend, the Parade of Ships, two air shows and ship tours will be held to celebrate the U.S. Navy Fleet Week. These events will impact the Fisherman’s Wharf area and the Marina District. More than 300,000 people are anticipated for these events each weekend day.

The celebration will begin on Saturday at 11 a.m. with the Parade of Ships and continue on Saturday and Sunday from noon to 4 p.m. with the air show. Ship tours will be open 8 a.m. to 5 p.m. from Saturday through Monday.

To accommodate the crowds for these events:

The F Market & Wharves will be supplemented by an F-line shuttle Saturday and Sunday; The F line shuttle will operate from Spear Street and Market Street to Pier 39. Passengers at the Embarcadero Station should use exit B-4;

The E-Embarcadero streetcar line from Caltrain Depot will run on Saturday and Sunday;

From Thursday through Sunday, the SFMTA will supplement service on the 47 and 49 routes with the 47L Van Ness Limited-Stop special bus service;

On Saturday and Sunday, the 47 Local will receive additional service (tentative, based on need);

Heavy ridership is anticipated before and after the event, the SFMTA will provide additional Muni buses on the following line and routes:

The following are preferred boarding locations after the event:

The last vehicles will depart these locations at 8 p.m. each night.

Good taxi locations include La Playa Street, or the Avenues near Lincoln Way on the south side of the park, or on the Avenues near the north side of the park on Fulton Street. Parking is very limited in Golden Gate Park and the surrounding neighborhoods. Several streets in Golden Gate Park will be closed to traffic including JFK Drive, Transverse Drive and Middle Drive West.

Ample bicycle parking will be provided.

Ten Ten Flag Raising and Parade
On Saturday the annual Chinese Ten Ten Celebration will include a flag raising ceremony and parade. Organizers expect about 1000 people to attend. The parade will begin at 2:30 p.m. from St. Mary’s Square at Pine and Quincy. It will continue west on Pine, north on Grant to east on Jackson and disburse between Grant and Kearny.

The following street closures will be required from 4 a.m. to 10 p.m.:

Taxi zone located at the corner of 16th and Noe streets. Parking is very limited in the Castro neighborhood.

Italian Heritage Parade
On Sunday the 144th annual Italian Heritage Day Parade will be held in North Beach and Fisherman’s Wharf beginning at 12:30 p.m. from Jefferson and Powell streets and proceed to Washington Square. The parade should last 2.5 hours and 150,000 people are expected.

The parade formation will require the following street closures, beginning at 8 a.m.:

The parade route will be closed to traffic until the parade clears.

Parking is very limited in the North Beach neighborhood.

49ers Football Game
On Sunday the San Francisco 49ers will host the Buffalo Bills starting at 1:25 p.m. at Candlestick Park. A sellout crowd of 68,000 fans is anticipated.

Muni customers may purchase their fare in advance. SFMTA staff will sell Muni fares at the following locations:

Heavy traffic would be expected both before and after the games. Game attendees and those traveling in the area are encouraged to take public transit.

Taxi zones are located at 2nd and Townsend; 2nd and King; and Third and King.

In 2012 meters on Port of San Francisco property, including The Embarcadero and Fisherman’s Wharf, will be enforced seven days per week throughout the year, except Thanksgiving Day, Christmas Day and New Year’s Day.

Hazards are always subject to ticketing and towing.