The parade began at about 11 a.m., and late this morning it was still working its way up Market Street to Civic Center Plaza, where a massive celebration is planned.

A sea of fans dressed in orange and black were lined up dozens deep in many spots along the parade route, with some sitting on building ledges and others leaning out of windows for a look.

Market Street was festooned with orange and black balloon arches, and the crowd was dressed in every kind of Giants garb imaginable, including the ubiquitous Pablo Sandoval Panda hat.

The parade included marching bands, fire trucks and motorized cable cars, with Manager Bruce Bochy and the players bringing up the rear. 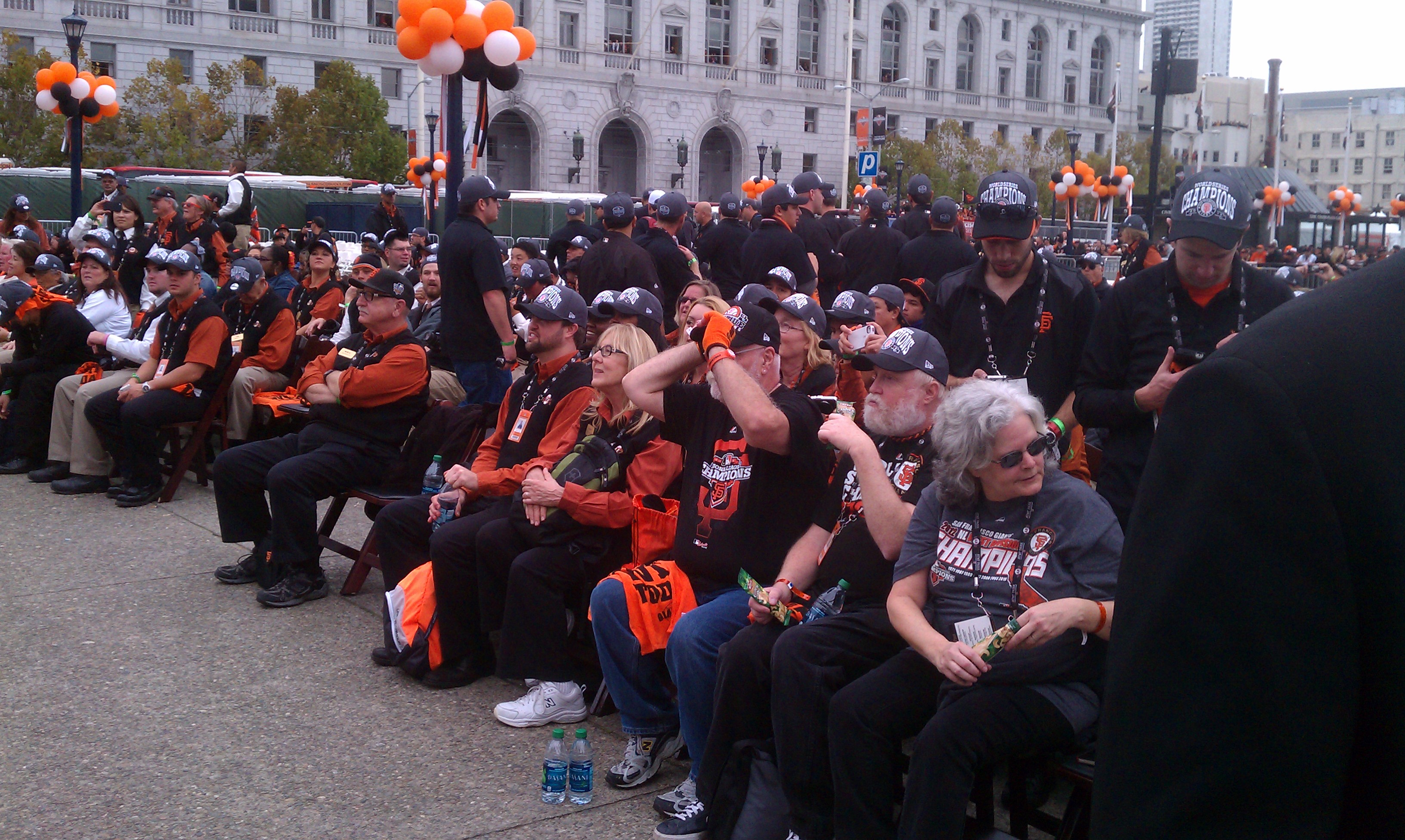 Mary Lou Welsh, 54, of Brentwood, who works in the Financial District, headed to the start of the parade route near Market and Main streets.

Although she said she is normally an Oakland A’s fan, she has been rooting for the Giants for the past few years as well, and wanted take in the scene.

“All of the hoopla is just great, with the Giants victory, and the fact that it’s Halloween too–BART was quite the scene this morning,” Welsh said.

Before the parade started, pitcher Matt Cain made his way along a chain-link fence at the staging area, signing autographs. Other fans tossed hats over the fence that pitcher Ryan Vogelsong and catcher Buster Posey signed and threw back.

When World Series MVP Sandoval appeared, the crowd began chanting his name.
Matt Parks, 17, of Marin, hadn’t been much of a baseball fan until this season, but was caught up in the Giants’ thrilling run through the postseason, when they came back from deficits twice to make it to the Fall Classic.

“This is just awesome! That’s about all I can say–just awesome,” he said.

Ryan Lopez, of Fremont, and his wife Kristy took the day off from work and brought their twin 10-month-old sons, J.J. and Xavier to the celebration.

“We’ve taken them to 10 games, so we might as well take them to the parade,” he said. “I wouldn’t want to be anywhere else.”

Quiroz said his son really wanted to go to the parade because he’s a big Giants fan, so he decided to take him out of school.

Quiroz said his son is a Little League catcher and pitcher and his son’s favorite player is Buster Posey. 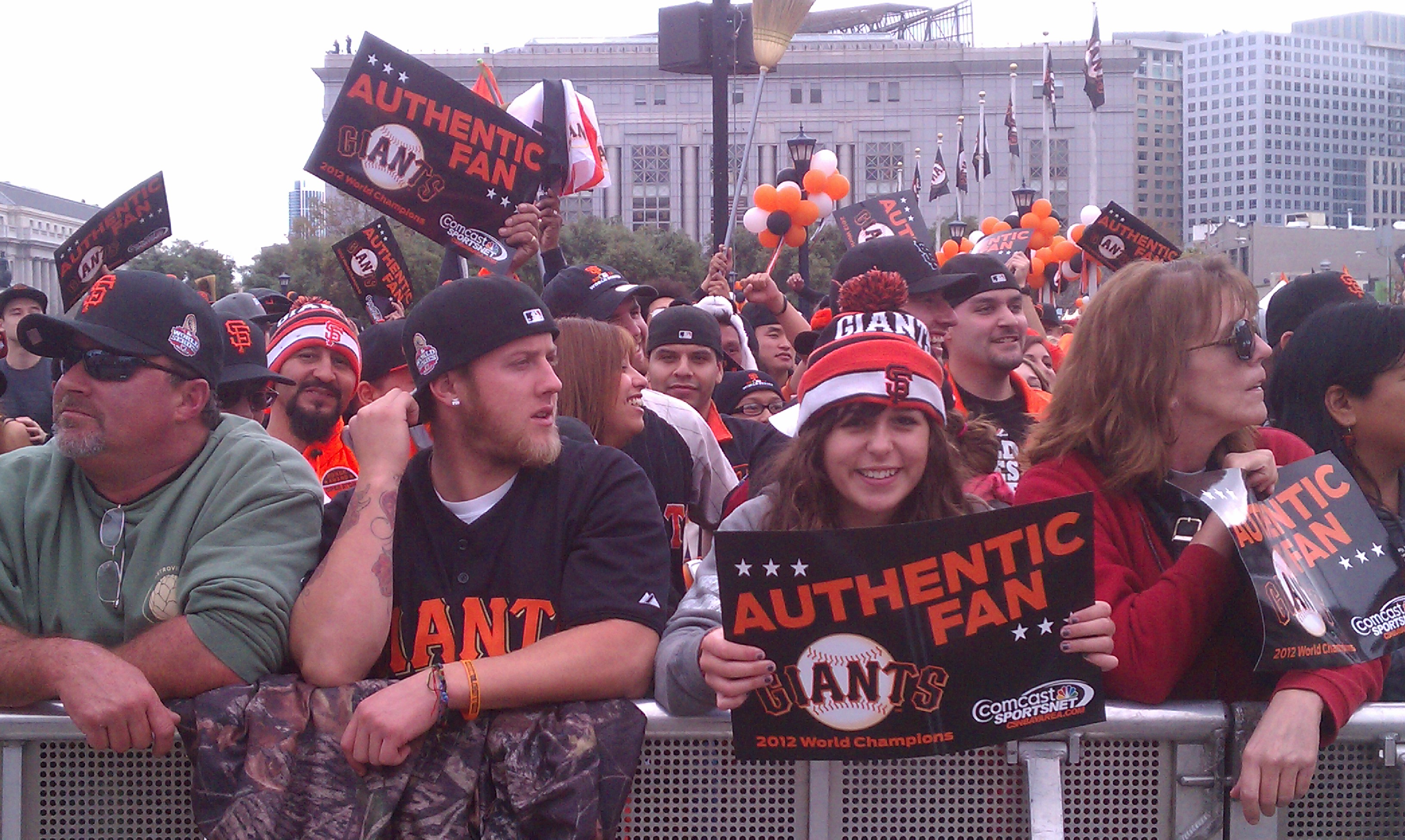 Sunny Lerner, 41, of San Francisco, and her and husband also didn’t have any qualms about taking their 10-year-old son and 7-year-old daughter out of school today.

“We like the community,” Lerner said. She said the parade is a “a wonderful distraction from all the bad times.”

“It’s a nice moment of solidarity,” she said.

Athena Hernandez brought her four children, who range in age from 1 to 13. She said she felt bad having to take her kids out of class for the parade but said, “if we don’t do it, we don’t know when it’s going to happen again.”

She came in 2010 while pregnant and said it was overwhelming, but this time it’s a better atmosphere, with less chaos. 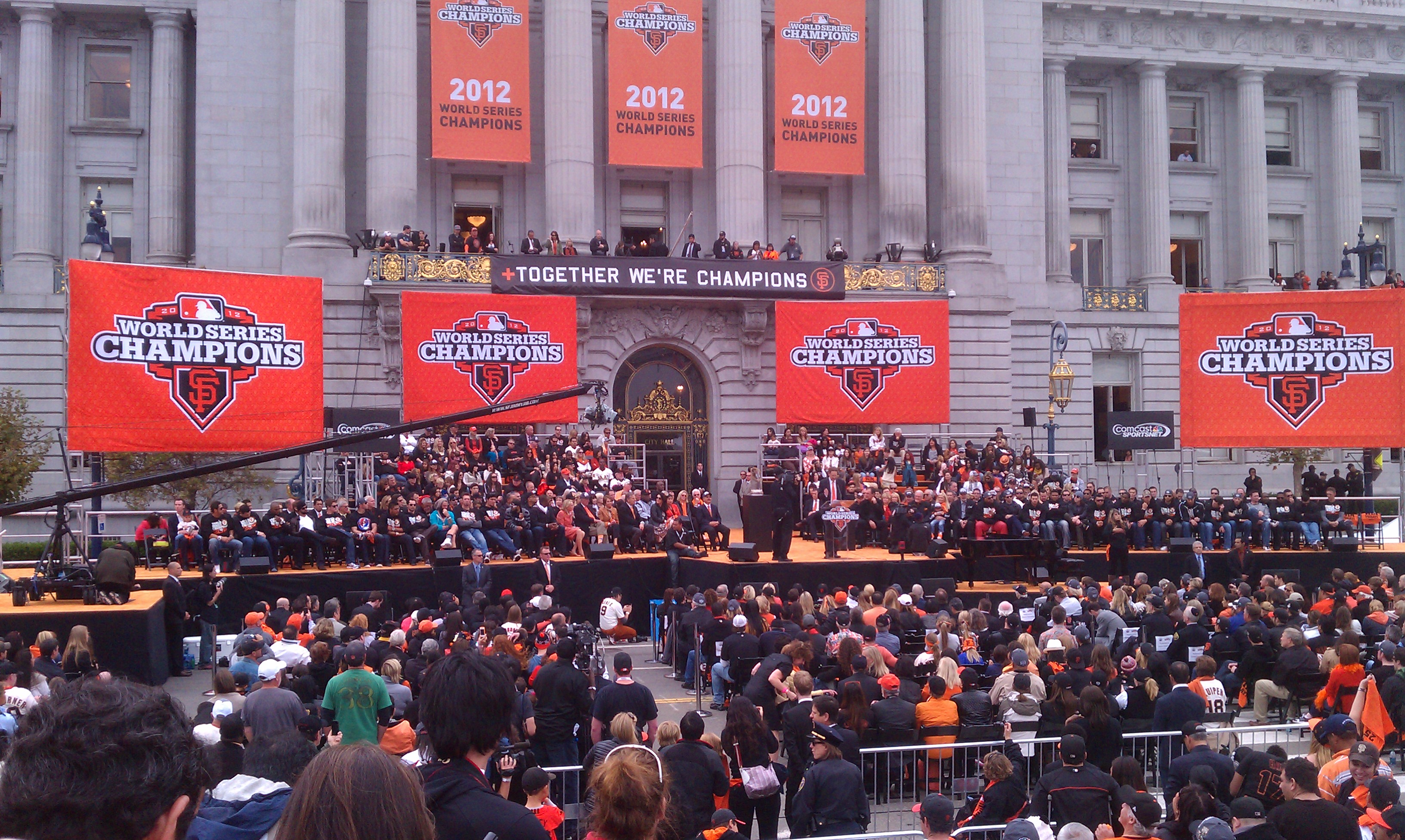 “But I’m not pregnant this time, so maybe that has something to do with it,” she said.

She said she parked 2 miles away and walked for 40 minutes with her four children in tow.

Michelle Chilicky, 38, a Bay Area native who now lives in Massachusetts, said she also thinks this year’s celebration feels calmer than that of 2010.

Karen Coffey, 32, drove up from Southern California to help the Giants celebrate their win.

“It’s a little intense but it’s a great vibe,” she said of the crowd.

The mass of people gathered for the Civic Center celebration stretched from City Hall to U.N. Plaza.

10:55 AM: After enduring a jam-packed ride into downtown San Francisco, thousands and thousands of people have lined up on Market Street and in the Civic Center area to celebrate the SF Giants’ World Series win.

As of 10:20 AM, BART spokesperson Jim Allison said that BART was seeing about 55,000 more riders than they would on a usual Wednesday, ridership numbers he said surpassed the record ridership BART had for the 2010 World Series victory parade. Allison also warned that BART ticket machines are running out of cash, and he urged riders to use a credit or debit card to purchase tickets instead. 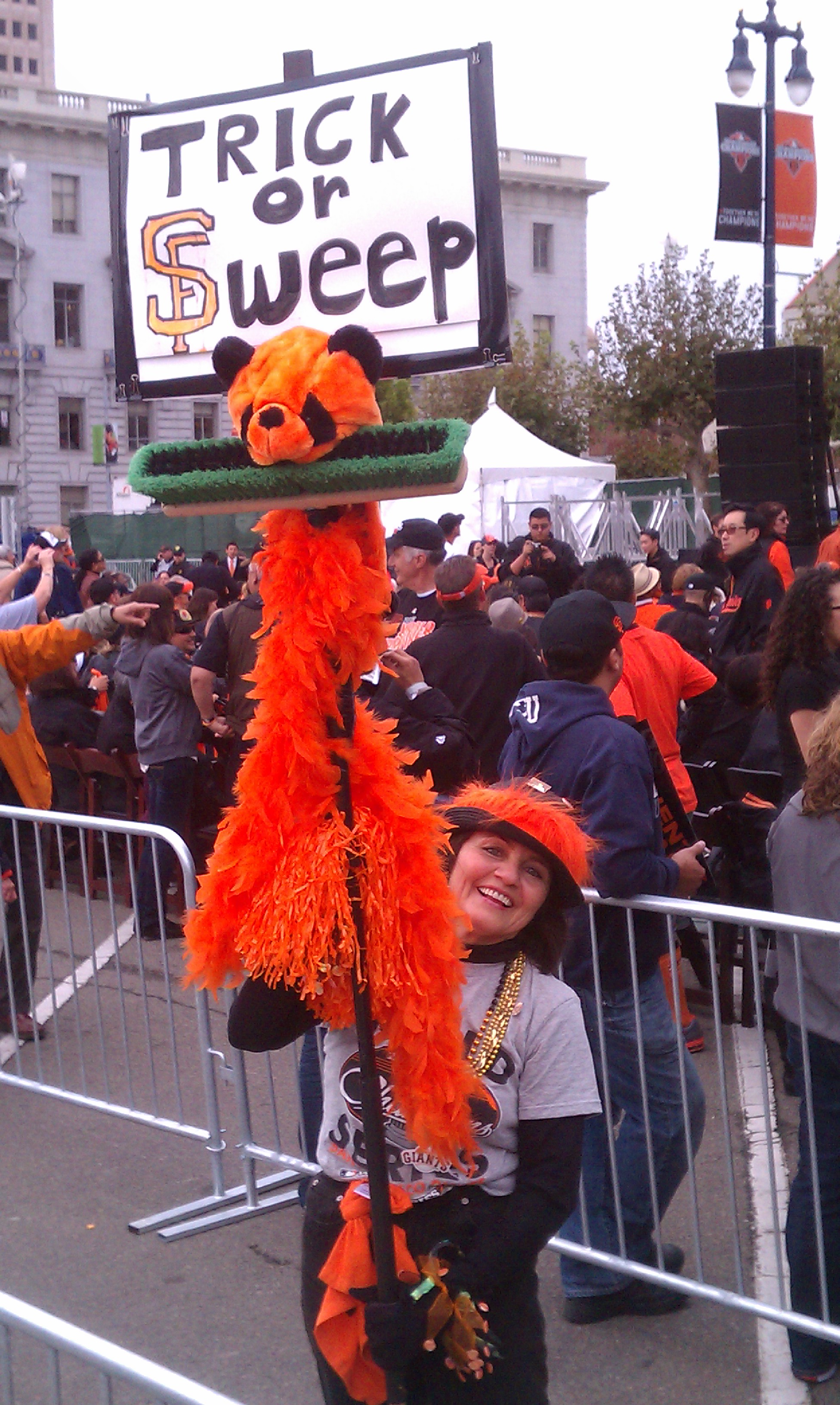