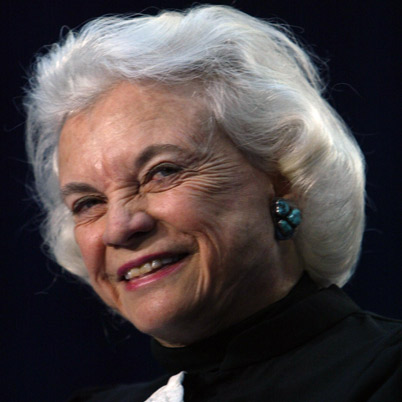 “I think it’s terribly important that we continue to educate our young people about how government works and how we are part of it,” O’Connor said.

“That really matters,” she told a sold-out hall of 900 people at Herbst Theatre during a noontime program presented by the Commonwealth Club.

O’Connor, 82, the first woman to serve on the high court, retired in early 2006 after more than 24 years on the court.

A former Arizona legislator and state court judge, she was appointed to the court by President Ronald Reagan in 1981.

In 2009, O’Connor founded iCivics, a nonprofit group that provides free online educational games and curriculum guides on topics such as the structure of government, citizenship rights and responsibilities, and the Constitution.

The materials are now being used in all 50 states, she said.

The games, which can be seen online at icivics.org, are aimed at middle-school students but can used by high schoolers as well, O’Connor said.

“We are falling down on telling our young people how our government works. To make it work, each of us has to participate,” she said.

The retired justice urged a group of about 100 high school students in the audience to register to vote as soon as they turn 18.

“If you haven’t registered to vote and you can, go do it. That matters,” she told the audience.

In addition to serving as board chairperson of iCivics, O’Connor takes occasional temporary assignments as a judge on federal appeals courts around the country.

O’Connor earned her undergraduate and law degrees at Stanford University and graduated third in her law school class in 1952.

But she recounted the story of her first job: none of the 40 law firms recruiting at Stanford would interview her and she got a position only by offering to work for free for the San Mateo County District Attorney, who at the time served as both prosecutor and county counsel.

O’Connor worked as a deputy county attorney advising county agencies and “I just loved my job,” she said.

When she joined the high court nearly 30 years later, there was no awkwardness on the part of her fellow justices about having a female colleague, she said.

“There was no problem. They were welcoming,” O’Connor said.

“I go into the courtroom today and look up and see three women.

When asked by program moderator Mary Bitterman whether she could envision a majority of women ever sitting on the court, O’Connor answered, “Of course I can.”

O’Connor declined to comment on any cases now pending before the Supreme Court.