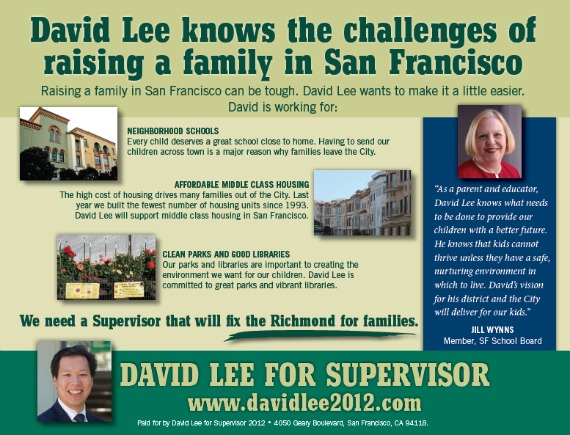 Hidden in the pile of political mail stuffed into Richmond District voters’ mailboxes over the weekend is a new David Lee campaign position.

Lee, who is seeking to unseat Eric Mar as the District 1 representative on the Board of Supervisors, sent out 36,000 pieces of political mail this weekend alone, according to records. One blasts Mar for voting with most of his colleagues to fund a third board aide; the second announced that Lee is now working for “neighborhood schools.”

“Raising a family in San Francisco is tough,” one of the nearly 22,000 green-bordered mailers distrubted Friday announced.

Under the bullet point “Neighborhood Schools,” the mailer reads, “Every child deserves a great school close to home. Having to send our children across town is a major reason why families leave the City.”

This is new ground for Lee, whose campaign Web site does not contain any mentions of schools or educational policies at publication time — though the hyperbolic SF Association of Realtors-funded video “Send Mar Back to Mars” does mention that Eric Mar opposed restoring “NEIGHBORHOOD schools.”

That’s a reference to last year’s Measure H, a ballot proposition aimed at shaking up San Francisco Unified School District’s oft-derided student assignment system. That measure lost by the narrowest of margins at the polls, 91,678 to 91,525, despite almost universal opposition from city elected officials (including school board member Jill Wynns, whose name and image is used on the mailer in question, as well as former school board presidents Mar and Sup. Jane Kim).

The Board of Supervisors has little, if any, power over the school district, which has its own elected board of officials and budget. So why the late add, about 10 days before the election?

“While a supervisor does have direct over site [SIC] of the school assignment process, they can advocate for policies that will keep families in San Francisco,” Lee said in an e-mail delivered through campaign manager Thomas Li.

“I believe that one of those policies would be neighborhood schools.”

Under the current SFUSD assignment system, a student can apply to attend school anywhere in San Francisco. Parents rank the schools desired for their children, listing up “any number” of schools, according to the SFUSD enrollment guide. In the current school year, 60 percent of parents received their first choice, while 20 percent were sent to a school not on their list of their top seven choices, according to SFUSD data.

Eric Mar’s daughter, Jade, attends Presidio Middle School, according to Mar campaign manager Nicole Derse. While on the Board of Education, Mar supported a student-assignment system that weighed students’ races.

Neighborhood schools received surprise October support from a mayoral candidate last year. Venture capitalist Joanna Rees, among many candidates frustrated by Mayor Ed Lee’s August entry into the race, bankrolled the late push for Measure H (though she funded a new, independent campaign committee, leaving the original committee that placed the measure on the ballot short of cash).