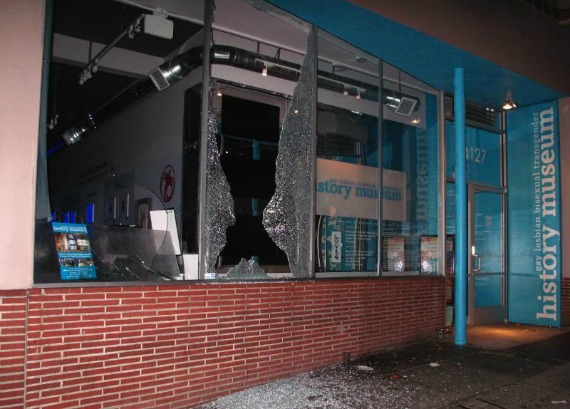 Two large plate-glass windows were shattered shortly before 5 a.m. Monday. The museum is located at 4127 18th St., near Castro Street.

The museum was closed Monday for repairs but was set to reopen at 11 a.m. today with the windows boarded up, said Gerard Koskovich, museum curator and founding member of the GLBT Historical Society.

Nothing inside was damaged, officials said.

Police spokesman Officer Gordon Shyy did not have additional details on the case as of this morning.

Koskovich said museum officials have not heard from investigators about whether the vandalism might be related to raucous celebrations that turned destructive after the San Francisco Giants won the World Series on Sunday night.

Koskovich said well wishes have been coming in from around the globe as well as donations to help the museum repair the windows, which he said could cost at least a few thousand dollars.

The museum touts itself as the only standalone museum of gay, lesbian, bisexual and transgender history and culture in the U.S.

Donations to help pay for the repairs can be made online at www.glbthistory.org/donate.