Detroit Mayor Taunts SF Giants: “We can handle any team out of the Bay Area” 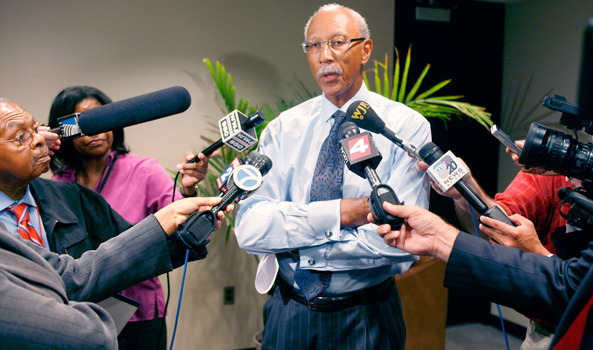 Fresh off of his winning bets that the San Francisco Giants would win their first two playoff series, Mayor Ed Lee is making another wager–this time with Detroit’s mayor–that the Giants will come out on top in the World Series against the Tigers.

Lee and Detroit Mayor David Bing have agreed on a bet in which the losing mayor will travel to the winner’s city and participate in a day of community service and other activities.

If the Giants win, Bing will come to San Francisco, play baseball with youths in the Junior Giants program and tour various companies in the city.

But if the Tigers win, Lee will travel to Detroit and tour the factory that produces the Chevy Volt, the car Lee uses as his official city vehicle.

“The San Francisco Giants are truly the comeback kids–this team never quits,” Lee said in a statement. “The city of Detroit also has a reputation for making an impressive comeback, although I fear I won’t get to see this firsthand, as the Giants are bound to win the World Series.”

Bing said in a statement, “The Giants have had great success, but we’ve already proven we can handle any team out of the Bay Area”–a reference to the Tigers’ triumph over the Oakland A’s in the American League Division Series earlier this month.

Lee made similar bets with the mayors of Cincinnati, which the Giants beat in the National League Division Series, and St. Louis, which San Francisco defeated in a seven-game National League Championship Series that ended Monday.

Cincinnati Mayor Mark Mallory now has to host a chili cook-off fundraiser at a local firehouse with the proceeds benefiting San Francisco youth programs, while St. Louis Mayor Francis Slay briefly had to change his Twitter avatar to a picture of the Giants’ logo.

Game 1 of the World Series between the Giants and Tigers starts at 5:07 p.m. today at AT&T Park.