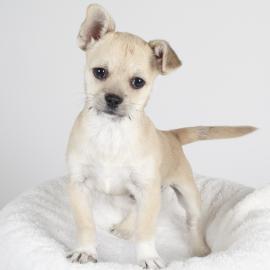 In what appears to be an annual event, yet another puppy has been abducted from the SF SPCA.

According to an email sent to media, Violet, a 10-week-old puppy (that’s her pictured to the right), was stolen yesterday afternoon from the SF SPCA Adoption Center.

According to spokesperson Krista Maloney, SFPD’s Mission District Station is investigating the theft, which happened at around 2 PM Tuesday. The SPCA is also looking at their surveillance video footage, and stills of the suspects might be released, as they were when another puppy was abducted from the SPCA last year.

Violet is a brown and white terrier mix, weighing approximately 7 lbs. Her microchip number is 982000197006884. She has yet to receive all of her vaccines and is still recovering from the spay surgery she had just two days before the abduction.

Violet had recently been transferred to the SF SPCA from SF’s Animal Care and Control after she was found abandoned in a garbage can.

The SPCA is offering a $500 reward for her safe return.