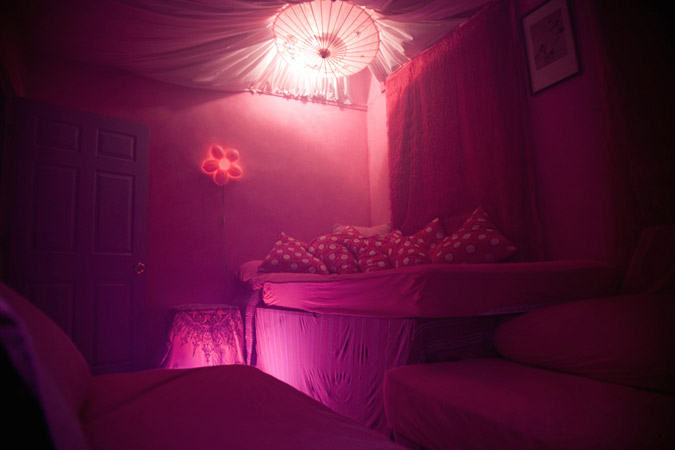 As I walked down the hallway, I spotted the two attractive shirtless men who had caught my eye before. Lying on their sides, they had their hands down each other’s pants, stroking each other with whatever modesty you can preserve at a party billed for sex. At this point in the party, this image was hardly the most shocking. Of course the pretty boys were into dudes.

I was at Pink, Mission Control’s “all welcome” play party. No dress code, no particular gender, no particular sexuality, and no particular theme, Pink is a good beginner’s party. Many of the people I met confessed their play party virginity as well. It’s the type of play party where you can test the waters: is this my scene? Are these my people? Do I want to join the group of naked writhing moaning bodies?

For the uninitiated, “play party” is a succinct way of saying “a party where sexual or kinky activities can occur and are not discouraged.” It’s not a wild, orgiastic Bacchanalian free-for-all, and it’s not a cult either. (Think more Shortbus, less Eyes Wide Shut.) There are a few house rules: don’t be creepy or a jerk, be safe, and ask for consent.

My goal for this evening? Talk to strangers. Talk to strangers who potentially want to sleep with me, like, tonight. For someone who still struggles to politely say no, this was a test for me. I came with a male friend to protect what little honor I had left. But most of the men I met were not creepy and did not aggressively hit on me. There was, of course, one man who was a little too touchy-feely, but he eventually found his peace in a puzzle of intertwined appendages and orifices.

I scoped out the large Mission apartment, which was converted into an inviting sexual playspace. The dance floor has a stripper pole should your deepest fantasy consist of clapping that booty and making it rain. The couches are covered in clean linens, and the space is decorated in passionate hues of purple and pink and red. As I wandered down the hall, I discovered some rooms were mostly used for conversation and some rooms required decidedly less clothing.

In these rooms, I kept my, ahem, intercourse to myself:

Ooh, what’s in this room? Oh. Ohhh, that’s a lot of naked flesh. You are totally having sex. Actually all of you are. I don’t really know who is licking or sucking or fucking what or how you all fit together. Christine, don’t stare! Phew, ok, none of you have really noticed my presence anyway so I am just going to retreat until I am no longer an awkward happenstance voyeur…

Outside the sex rooms, there was no snack table to hover over or cat to pet, so I couldn’t exactly keep the corner warm all night. But as I mingled near the BYOB bar, talking to strangers became easier and easier. The people at Mission Control are there to meet people, not to judge you on your social finesse or your mismatched underwear or your always-in-question sexuality.

Sure, sometimes the strangers were strange. One woman, in the background of a conversation, draped herself on the furniture. She looked like a kitten begging for belly rubs, letting her head hang over the seat as her legs rested against the back of the sofa. Later in the night, I realized she was begging for bondage, as a man hurried to secure her to a chaise lounge with some hemp rope.

Then again, the strangers were also a tad familiar. Especially when one of those strangers was someone with whom I once shared a coworking space. Oh, your startup was right next to my startup? I didn’t know that “pervert ninja” and “deviant rockstar” were on your résumé too!

One of the pretty boys interrupted my degenerate networking by joining my social huddle at the bar. He shook hands with us all, and I introduced myself to his nipples. It was only until after I left the party that I wondered if he had washed his hands in between the stroking and the shake. Hey, maybe you touched someone else’s genitals. In fact, I’m 100% certain you did.

Some people come to the Mission Control parties to hook up. Some people come just to hang out. Whatever your mission, you never feel obligated to do anything outside your limits. It’s not like the master of ceremonies approaches you and says, “OK, pervert, you’ve had your eyeful. Now buck up and drop those drawers!” Unless, of course, you find someone who’s willing to play that role for you…

When I invited my friend to the play party, he asked me what the difference was between a play party and a regular party. Don’t people tend to have sex at or after the latter anyway? The difference: not much. In the end, a play party feels a lot safer and more welcoming. No douchebags, no limits crossed, no expectations, and no one alone and passed out on the couch.

The Pink party allowed me to further define my boundaries, to cross something off my bucket list, and to provide space for fantasies that could later become realities. I didn’t have sex with anyone. I didn’t give out my number. I did shake a lot of hands. Lotsa hands. So I guess you could say I pretty much touched a bunch of genitals.