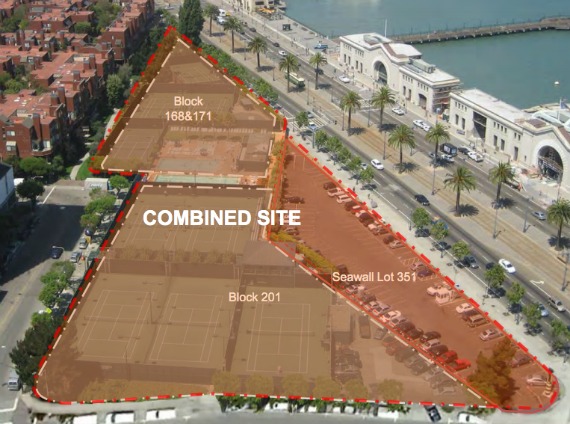 Opponents of a condominium project along San Francisco’s waterfront were not able to convince the city’s Board of Supervisors to overturn their approval of the project, so the issue will go to the voters as a referendum on the November 2013 ballot.

The 8 Washington project, located in the city’s Financial District just north of the Ferry Building, was approved by the board by an 8-3 vote in June with a provision to increase the maximum height allowable for a building at the site from 84 feet to 136.

But a group of opponents calling itself “No Wall on the Waterfront” gathered more than 30,000 signatures to qualify the referendum to overturn the approval of the increased height limit.

Before it goes to voters, the supervisors had a chance today to overturn their approval. However, they held to their original votes despite the arguments of board president David Chiu, one of the three opponents of the project.

Chiu said 8 Washington gives San Francisco “luxury condos at a time when we don’t need it,” and that a 500-plus page description of the project will have to be added to the voter information pamphlet for the November 2013 election at a hefty cost to the city.

Supervisor Scott Wiener was not persuaded by the arguments.

“The facts today are exactly what they were” when the supervisors previously passed it, Wiener said.

Supervisor Christina Olague, one of three members of the board that the coalition had targeted to change their vote along with Eric Mar and Jane Kim, said she was pressured strongly by the project’s opponents.

“I’ve been forewarned of dire electoral consequences,” said Olague, who faces a challenge from several candidates for her District 5 seat in this November’s election. “I felt like a schoolgirl being bullied on the playground … but I don’t feel like making my vote based on fear.”

San Francisco Waterfront Partners, the developers of 8 Washington, say on the project’s website that the 165-unit complex will help address the need for more housing options in the city, particularly in transit-rich areas.

The website also defends the height of the buildings at 8 Washington, saying they will “provide a flexible range of heights and massing that respond to the natural topography of the surrounding community and built environment.”

The project will remain on hold until after next year’s election.

The opponents’ referendum campaign “undermines the past seven years of efforts and approvals and jeopardizes the project’s vast public benefits and jobs,” the website states.