Felons, New Voters Getting On The Democracy Bus 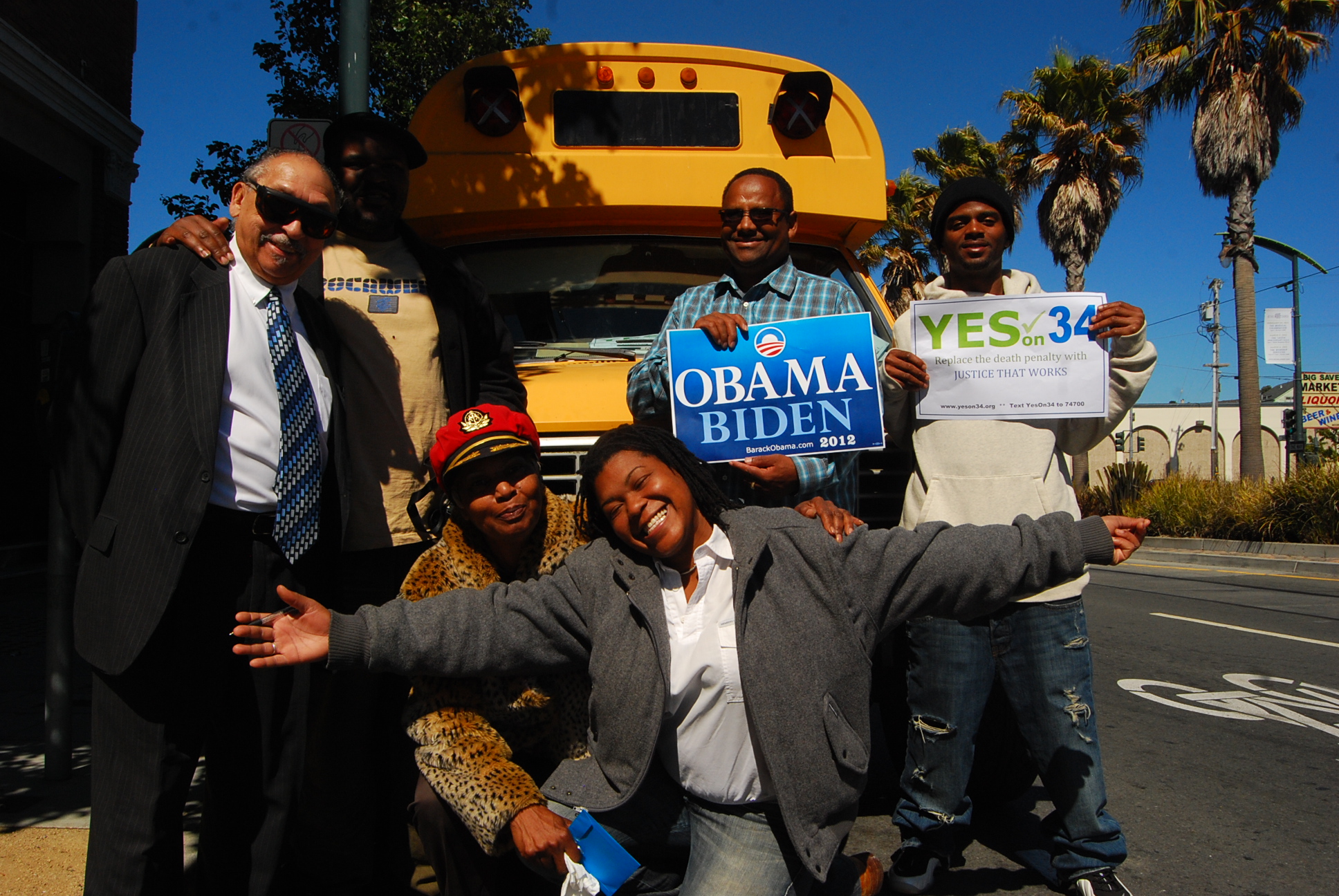 Isaiah Hutchinson’s going to vote this year, though he’s not quite sure who Mitt Romney is, and he’s not yet worked all the way through the measures he’ll be asked to approve at the polls.

But give him some time — this is his first election. Fact is, before Saturday, Hutchinson didn’t even know he was allowed to vote.

2008 would have been the first time he’d be legally allowed to cast a ballot. And he remembers election night that year well.

“We — a whole bunch of us in the pod — were watching. It was packed,” said Hutchinson, who saw Barack Obama elected president via a television screen in Santa Clara County jail, where he was serving time on a felony charge. “Everyone went crazy — black, Latino, everyone.”

Four years later, Hutchinson, who is 24 (but looks 35) is home. And he would have stayed home on Election Night 2012, if it weren’t for a short yellow bus that last did service in a rap video.

Mike Brown was on the bus Saturday, which started up in Bayview in the morning. On 24-inch rims, the bus — formerly the property of hyphy pioneer Mistah F.A.B. — rolled to San Francisco Democratic Party campaign headquarters, and back to the neighborhood, with a pile of voter registration cards (some, like Hutchinson’s, filled out and completed), campaign literature, and some momentum Brown, a neighborhood and community activist, hopes is infectious.

“The people we’re speaking to may be disillusioned about politics,” says Brown, whose bus is the gimmick in a very serious affair: getting the vote out among people like Hutchinson, who as a recently-incarcerated young black male, is part of a population that participates in American democracy rarely, if ever. Ex-felons, ex-cons, moms, dads, grandmamas, everyone. “We want to get them on the bus,” says Brown, who vowed Saturday to keep the bus rolling multiple times per week until October 2, when for the next two weeks, it’ll be on the road constantly until the October 16 voter registration deadline.

Turnout in Bayview is historically lower than in other parts of the city. The neighborhood posted the lowest turnout citywide in 2008, according to records.

Someone in prison on a felony charge (or jail, as overcrowded state prisons often leave low-level offenders in county jails closer to home) or on parole for said charge can’t vote. But once your parole is over, you’re back participating in democracy — if you realize it.

“I was told I couldn’t vote” by probation officers, authorities, whoever, Hutchinson said on Saturday. When campaigners, petition-gatherers, or anyone else with a cause to peddle approached him, the reaction was swift. “I’d say, ‘Fuck it. I can’t vote,'” he said. “And if I did anyway, would it really matter?”

That — voter apathy — is another matter for another day. For now, Hutchinson, standing on Third Street in front of the bus, is clutching a Yes on 34 sign. His first political issue, he says, will be death penalty reform.

How’d he come by this cause? Voter education usually means familiarizing oneself with the issues, but the first question he asked Brown, when Brown picked him up at home that morning, was a basic one. “I asked, ‘Can I vote?'” he said. “That’s how I found out.” Removing the death penalty from California’s correctional culture was the next step.

For Brown, registration is half the battle. Or even less. “We’re trying to get people in with early voting,” he says, noting that once a new voter is registered, the best way to make sure they don’t miss casting a vote at the polls is to avoid the polls altogether, and get people to vote by mail.

Hutchinson admits he’s way behind. He wasn’t exactly sure who Obama’s opponent is — “Ramadan or something” — and, like the reporter asking him, wasn’t exactly sure what the other propositions on the state ballot are. Is Prop. 36 about the three-strikes law? Or was it 32? This is all new stuff. But it’s all on the bus.