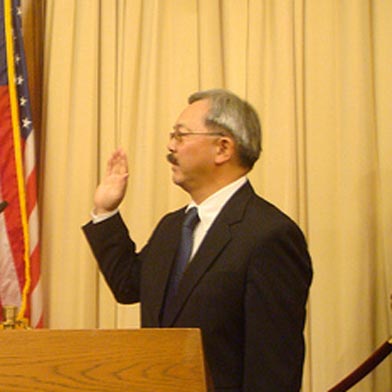 As the monthlong August break at City Hall rolls into the 60-day sprint towards the November elections, San Francisco’s political wonks are looking forward. But not the Richmond District Democratic Club, for whom there’s unfinished business — namely, the perjury allegations they feel Mayor Ed Lee unfairly dodged during the fog day months.

Seems like it was just a few months ago that the mayor was accused of uttering a mistruth on the stand at the Ethics Commisson removal hearings of suspended Sheriff Ross Mirkarimi. It also seemed like we were at last rid of that saga, which has filled newsfeeds across town with tales of bruises, Venezuela, and testimony concerning panties since January.

It was, and we aren’t: the Board of Supervisors has until September 16 to decide Mirkarimi’s fate; three supervisors must defy Lee and vote against the Ethics Commission’s findings in order to save Ross’s job.

The Ethics Commission chose also to ignore allegations from former Board of Supervisors President Aaron Peskin and Building Inspection Commissioner Debra Walker that Lee lied when he testified that he never talked about Mirkarimi with any members of the Board or had a surrogate offer Mirkarimi another job if he agreed to resign as sheriff.

Walker insists that current District 5 Supervisor Christina Olague mentioned a conversation with Lee on the matter; Peskin says Chinatown construction expediter Walter Wong approached him on Lee’s behalf regarding the sheriff. Both said they were willing to testify under oath; neither were subpoeanaed.

That’s what grinds the gears of the Richmond Democrats, who last month passed a unanimous resolution blasting District Attorney George Gascon for also choosing not to investigate the allegations, according to club Vice-President Wendy Aragon.

“Some people [in the club] think Ross should resign; we’re not taking a stand on that position,” Aragon told the Appeal.

“But accusations of perjury are not ok… if the people who made these accusations are willing to testify under oath, we believe them. the fact that the DA doesn’t want to look into it is very upsetting.”

The resolution reads, in part:

“The people of San Francisco should be able to expected all elected officials to follow the highest ethical standard. We further believe that such ethical standards must be enforced consistently and without the appearance of political motivation…

“We hereby request a formal investigation into the allegations that Mayor Ed Lee committed perjury… by the San Francisco District Attorney.”

The club is “looking for real action,” Aragon said. “If George Gascon decides he is not going to take this seriously, we will take this somewhere higher.”

For those who would scoff at the resolution being less worthy than an Emperor Norton decree, consider: The RDDC is a legit club, with a charter from the Democratic County Central Committee, the blue team’s local party apparatus, dating back to 1987; former Supervisor Jake McGoldrick is a member, as is current District 1 supervisor Eric Mar (neither of whom were involved or voted on the resolution, Aragorn said).

Progressive Democrats do make up a large part of the club’s membership, Aragon said, but neighborhood moderates and activists are also members (District 1 supervisor candidate David Lee is not a member; Lee reportedly ducked out of the club’s endorsement meetings when he heard Aragon make a pro-Mar statement to another city Democratic club).

But what difference can one club make? Gascon has already dismissed the possibility of an investigation; Lee himself appears already moving on, has ceased speaking on the matter beyond brief press releases, praising the Ethics Commission for its decision (upholding his/validating his). Is anyone, someone, out there listening? Maybe when all the shakers get back from Charlotte.