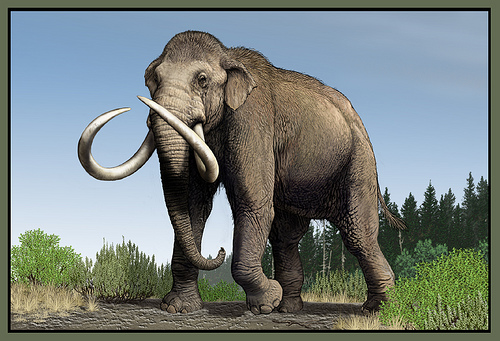 Construction for San Francisco’s new Transbay Transit Center has unearthed some interesting stuff — for example, the “remnants of a boozy village” discovered last year. On Monday, however, workers found something older: the tooth and partial jawbone of a long-extinct mammoth.

According to the TJPA, experts believe the remains belonged to a Columbian Mammoth, which Wikipedia describes as “an extinct species of elephant of the Quaternary period that appeared in North America (in the present United States and to as far south as Nicaragua and Honduras) during the late Pleistocene.”

According to University of Washington geologists, the Columbian Mammoth died off about 11,000 years ago.

“During that time, the San Francisco Bay Area was a grassy valley that closely resembled the Serengeti of East Africa and had a wide array of inhabitants including: saber tooth cats, giant ground sloths, mastodons, elk, tapirs, short-faced bear, and bison,” the TJPA said.

A Columbian Mammoth like the one discovered Monday would have been about 13 feet tall and weighed 10,000 lbs when fully grown.

Lest you start visualizing Ray Romano, you should know that the “Columbian Mammoth was larger, but less hairy, than the wooly mammoth which lived near the ice sheets in the northern end of the continent.”

According to a press release sent by the TJPA, crane operator Brandon Valasik uncovered the tooth and jaw 110 feet below ground level of the east end of the Transbay Transit Center jobsite.

Want to see the tooth and jaw for yourself? You might be able to, eventually: the TJPA says they’ll be donating both to the California Academy of Sciences, which is expected to exhibit both sometime in the future.