A Real Screamer: The Normal Heart at A.C.T. 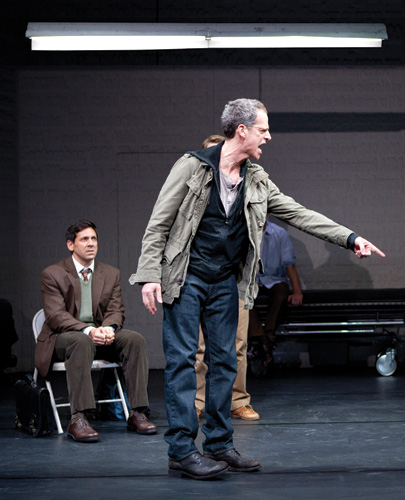 Contagion. Specifically, HIV/AIDS, but the very early days of the outbreak – the days of patient zero, when deaths were beginning to mount in the tens rather than the thousands and nobody had the slightest idea what the killer was or how it operated; only that it seemed to be targeting gay men.

This is the premise of Larry Kramer’s 1985 play, The Normal Heart, a George Wolfe-directed revival of which has arrived at A.C.T. after highly successful runs on Broadway and in Washington D.C.

Of course, The Normal Heart at some level addresses what it was like being gay at this critical time. Indeed, we can point to these years, 1981 – 1984, as perhaps the defining moment in the community’s history to date: a culture of sexual liberation forced to re-think itself before a mortal threat, and to demand action from the world at large.

But in fact, The Normal Heart hardly stops to meditate on these matters. Lest things get lofty, the plot whisks away moments of reflection before they even hit the ground. Instead, driven and hyper-verbose, the narrative unfolds like a cinematic outbreak thriller: a few prescient, determined individuals setting out to perform Herculean feats — getting Reagen-era social institutions to not only acknowledge the issue but help to fight it before it gets out of control, and persuading the gay community that it needs to put the cooler on a proud tradition of sexual freedom. Along this trajectory it even manages to be quite funny. First and foremost, though, it is a play about activism, and loudly so.

Being gay hardly seems the defining attribute of the play’s protagonist, Ned Weeks (Patrick Breen). His Judaism, rather, holds pride of place. Modeled directly after the playwright (the whole of the work is based on real people and real events), Weeks is something like a Woody Allen on crack, who has metabolized his guilt and neurosis into obsessive, raging gay activism. Kramer, speaking through Weeks, is relentless in his comparisons of AIDS to the holocaust: both annihilations of marginal groups, allowed to occur by multilateral silence. If Weeks’ personality could be summed up in a phrase, it would be “silence equals death.”

While not an unlikeable character, Weeks severely tries the patience of his brothers in arms, to whom he subjects more or less constant bullying, fits of rage and accusations of weak resolve (the character aptly labels himself “a screamer”). Even his AIDS-afflicted lover, Felix Turner (Patrick Alparone), receives a berating in his final days.

But Weeks gets away with it because, while he may be a bit of a maniac, he’s right. He and Dr. Emma Brookner (Jordan Baker), the headstrong physician who resolved to investigate the disease from the get-go in spite of unknown risks and motivated Weeks to speak up every step of the way, emerge as the play’s unequivocal heroes (Turner, for putting up with his curmudgeon of a lover, duly emerges a full-on saint). We know time will vindicate them.

The A.C.T. production of The Normal Heart is frightening, funny, and when it manages to catch its breath, deeply heartfelt. The performances, in particular Breen’s portrayal of Weeks, are strong across the board. Importantly, the play is also a reminder that, thirty years later, the AIDS crisis is far from over and still not duly recognized. And so, more than for revisiting a critical moment or probing the evolution of the gay culture, it is for remaining a bona fide screamer that The Normal Heart continues to earn our applause.