I recently wrote that electronic music had reached its pinnacle in terms of creativity, and it turns out I was slightly wrong: there is still a wave of beautiful, odd music streaming in through the cracks.

Meet Totally Enormous Extinct Dinosaurs, who along with his unique moniker and funky costume is music to match. At his sold out show at the Independent last week, the 26-year-old producer took us on a ride through time, space and BPMs.

Alright, maybe just the BPMs, but that’s becoming a rarity in the electro scene.

Where many genres and DJs keep the same rhythm through a set -whether it be dubstep, moombahton, or house -TEED smoothly transitioned between tastes of each of them. From roaming sound-scapes, to assembly line like glitch, to head-banging house, the U.K. producer passed through each without breaking the movement of the crowd.

This was a “live” show, and he was constantly bouncing around between his wide spread of synths and gadgets on stage, only stopping for a few seconds to address the other people in the room. Occasionally he would pick up a mic and mix in some live vocals, and the dance party would turn into a sing-a-long.

He’s on tour behind his debut album, Trouble, but has been producing for years and is slowly building the attention he deserves. He has already collaborated with mastermind Damon Albarn (Blur, Gorillaz) and was recently serenading thousands at Lollapalooza.

Dinosaurs may be history, but this one is just getting started. 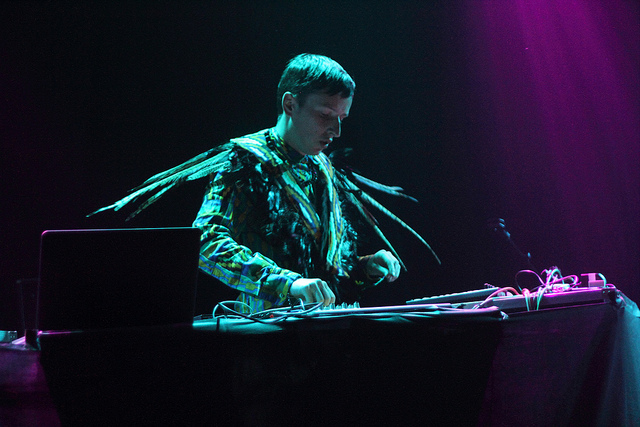