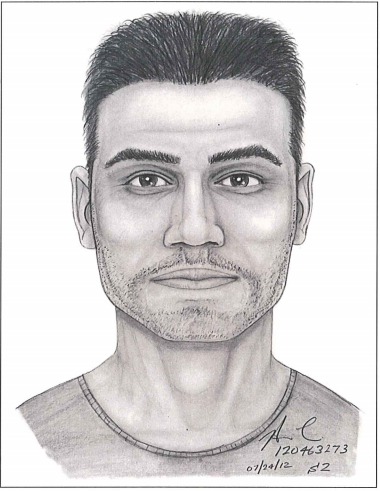 San Francisco police are seeking a person of interest in the death of a hairstylist who was killed in his home in the city’s Diamond Heights neighborhood in June.

The body of Steven “Eriq” Escalon, 28, was found bound and gagged in his apartment in the 5000 block of Diamond Heights Boulevard shortly after 6 p.m. on June 12, according to police.

The person of interest in Escalon’s death was seen with him early the morning of the day he was killed. The pair got into a taxi in front of 440 Castro St. at about 1:30 a.m., police said.

Police have released a sketch of the person, described as a white or Hispanic man between 25 and 30 years old who has a slim build and is between 5 feet 8 and 5 feet 10 inches tall. He was wearing a black T-shirt.

Police had previously disseminated a flier in the neighborhood seeking information about someone seen in the area carrying a flat-screen TV, at least one computer and possibly a game console around the time of the killing.

Escalon, who grew up in the Central Valley, worked as a cosmetologist at Metamorphosis Salon on Market Street, according to his Facebook page.

Anyone who knows the identity of the person of interest or has information about the case is asked to call Sgt. Scott Warnke or Inspectors Daniel Dedet, Kevin Jones or Robert Valverde with the department’s homicide unit at (415) 553-1145.

People wishing to remain anonymous can call the department’s anonymous tip line at (415) 575-4444 or send a tip by text message to TIP411.