Recall: Black Red Vines Have Too Much Lead 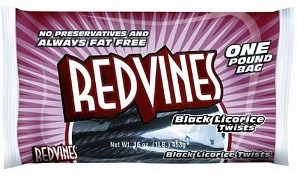 California health officials are warning consumers, especially children and pregnant women, not to eat Red Vines black licorice twists after discovering that the candy contains levels of lead that exceed state standards, according to the California Department of Public Health.

Red Vines candy was recalled when candy packages marked with the expiration date 02/04/13 were found to contain up to 13.2 micrograms of lead per serving, according to the California Department of Public Health.

Any consumers in possession of the candy should dispose of it immediately.

Manufactured and distributed by Union City-based American Licorice Co., Red Vines candy is sold in a one-pound, light red package with ‘Red Vines’ written in bold, white letters. The black licorice candy shows through the packaging and the words ‘Black Licorice Twists’ appear toward the bottom of the package.

America Licorice Co. has issued a voluntary recall of the affected batch of candy.

Children under 6 years of age should not consume more than 6 micrograms of lead per day from all dietary sources, according to the Monterey County Health Department.

Pregnant women and parents of children who may have consumed the candy should consult their physicians.