Midnight Magic is bringing back the foxy 1970s of New York with a bad case of Brooklyn funk. And the brigade – horns, drums, keys and sassy singer with attitude – played the Rickshaw Stop Saturday night on their short soul-train through the West Coast.

Their sound is hardly original – they compare themselves to a breed between Donna Summers and George Clinton – but the timing and style certainly make it unique. There’s a sharp edge to the redheaded singer, Tiffany Roth, who sarcastically teased the crowd about not being mature enough to groove to a slow tune. The nine-piece band wasn’t out in full force, but still provided a lot more soul and action than the disco revival going around the DJ scene.

The crowd at Blow Up wasn’t living up to its hip reputation, and at times that seemed to be rubbing off on Roth, who flashed less-than-pleased looks through out the night. Maybe that’s just the disco diva attitude to match the booming voice? Either way, the group, which holds ex-members of Hercules and Love Affair, plays tightly and flashes a confident amount of disco authenticity.

They’ve had a few hits in the last couple years (“Beam Me Up,” Drop Me A Line”), have had opening slots for Cut Copy, and released a short EP in April, though most of their released music is just remixes.

The industry is more fast-paced than it was when platform shoes were king, and they’re going to need to pick up the pace if they don’t want disco to die. Again. 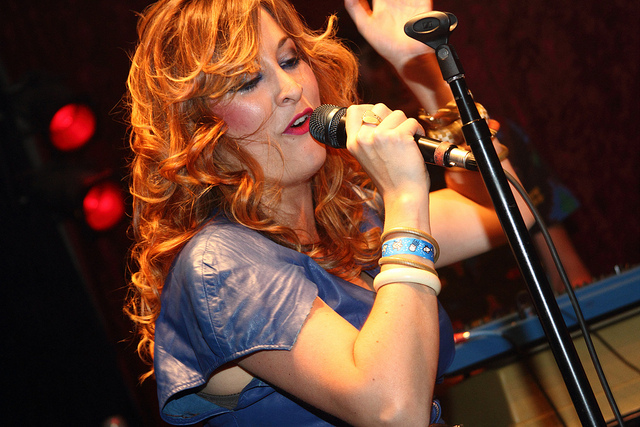